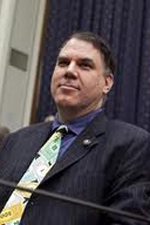 The whack-job used the word ‘appeasement” concerning Democrat’s willing to buckle to the pressure of the almighty Republicans in Congress. That’s just friggin’ hilarious since the Executive Branch and Congress was willing to bypass normal rules to mandate what they could during the past two years.

As a reminder to looser Rep. Alan Grayson (D-Fla.), the Democrats in Washington had virtually complete control of both the House and Senate up until the death of Sen. Ted Kennedy (D-Mass.) and they could have passed anything they wanted. The issue was they could not get their own party to work in lock-step with the extreme vision of cap and tax, health care ‘reform’, and open borders.

Just a few of the tricks include reconciliation, not coming up with a budget prior to the election, health care waivers with unchecked power held by the secretary of Health and Human Services, FCC power grabs and DEP mandates with no backing legislation.

Steve Gilbert at Sweetness & Light sums up the Politico article with Grayson’s whining quite well so go read that piece.

In Grayson’s eyes, he really thinks if the government just socialized the health care industry completely, passed cap and tax, and opened the borders while granting complete amnesty to the illegal aliens already here, the Democrats would have kept control of the House.

Of course, I can’t prove him wrong since you can’t prove a negative, but I’ll just let the man wallow in his own stupidity.

Your Krauthammer Moment: No tax cuts, no budget, they’re incompetent

And the rich get richer … Washington style