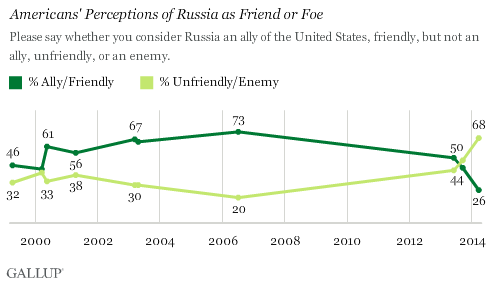 President Obama was doing so well when it came to American perception of Russia, but it was all smoke and mirrors. The Hillary Clinton “Reset” is a total failure. Our perceived weakness got this ball rolling, I’m just wondering where it will stop.

After a tumultuous winter in which Russia has been at odds with the West over Crimea, more than two-thirds of Americans say Russia is either unfriendly (44%) or an enemy (24%) to the U.S. This is a departure from sentiments in recent years and a record high since 1999.

We’ve broken back into Bush-era numbers within the period of a few months.

Breaking Russia – How dare the United States defend itself!