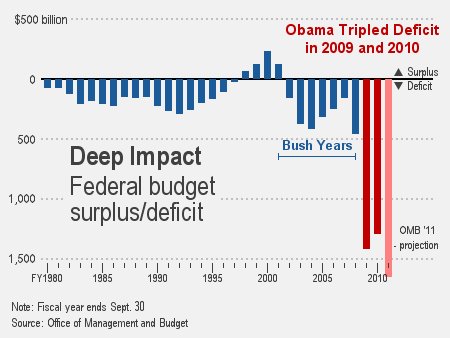 For reference, George W. Bush’s administration deficits never got close to $500 billion for the entire year. The Office of Management and Budget (White House) is estimating the 2011 deficit will be $1.65 trillion.

The Bush administration spent way too much money. I’ve been saying that for years. But to think the Obama administration continues to pile on hundreds of billions every month is absolute disaster. We hit $223 billion for Feb. 2011. From the Washington Times.

That figure tops last February’s record of $220.9 billion, and marks the 29th straight month the government has run in the red — a modern record. The last time the federal government posted even a monthly surplus was September 2008, just before the financial collapse. 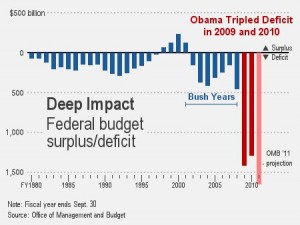 The White House projected Monday that the federal deficit would spike to $1.65 trillion in the current fiscal year, the largest dollar amount ever, adding pressure on Democrats and Republicans to tackle growing levels of debt.

The projected deficit for 2011 is fueled in part by a tax-cut extension that President Barack Obama and Republican lawmakers brokered in December, two senior administration officials said. It would equal 10.9% of gross domestic product, the largest deficit as a share of the economy since World War II.

Yup … in part fueled by the fact you sent a message to Congress you were not willing to pay more in taxes and demanded real spending reductions.

In the meantime, Democrats are suggesting we cut the federal budget by no more than .28 percent. That’s POINT TWO EIGHT percent.

Debt, deficit…what would Canada do?

Most excellent: CBO says deficits $1 trillion a year for a decade

Obamacare waivers…what you haven’t been told

When the going gets tough…
Scroll to top