This is another example of the young president’s inexperience. Really now, who’s running the show in the Executive Branch? This morning, the White House blog posted a five minute Obama video message sending greetings to Muslims around the world. That’s fine and all, but he basically ignored the all-faith-inclusive National Day of Prayer on May 7.

Christians, Catholics, Jews, Episcopalians and members of other faiths…. what say you? From The Washington Times on May 6. Hat tip to Jim at Gateway Pundit and HotAirPundit.

President Obama is distancing himself from the National Day of Prayer by nixing a formal early morning service and not attending a large Catholic prayer breakfast the next morning.

All Mr. Obama will do for the National Day of Prayer, which is Thursday, is sign a proclamation honoring the day, which originated in 1952 when Congress set aside the first Thursday in May for the observance.

For the past eight years, President George W. Bush invited selected Christian and Jewish leaders to the White House East Room, where he typically would give a short speech and several leaders offered prayers.

And from the White House blog earlier today, with translations available in 13 languages. 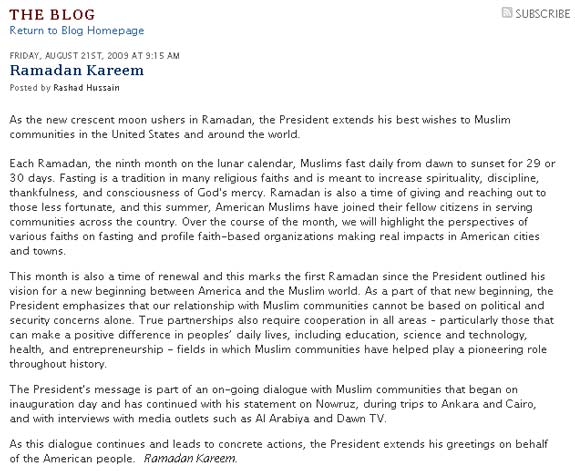 Kim Jong Il challenges The One

Have A Smoke … Please
4 replies

Are we in a post-Constitutional America?Steele to Obama: Up or down baby … pass the bill …
Scroll to top