The party must go on. First and foremost – you realize don’t you – the federal government will be spending billions of dollars more than they did last year even though the so-called “devastating” sequester is in place. Everything is being canceled everywhere, and even the president plans to “give back” 5 percent of his salary. Since I passed 6th grade math, I just do not get it.

The Blue Angel and Thunderbird shows have been canceled. There are rumors of cancer patients not getting drugs. Head Start lost 5 percent of their funding and other schools supposedly are losing funding. Small airports are planning to send air traffic controllers home. Furloughs are happening, reducing work hours by 20 percent.

We spent a few dollars less in 2012 ($3.5 trillion) which for the math-challenged is a federal budget increase of $100 billion. Factoring in the sequester, we’re spending an additional $59 billion this year, but they canceled the White House tours for kids? I guess a few billion just doesn’t go as far as it used to.

On to Memphis Soul music at the White House the other night.

The sequester may have many across the country singing the blues, but for President Obama, it was all about Memphis Soul.

Even with the threat of furloughs and government cuts sparked by the sequester, Obama took the time to enjoy a star-studded concert at the White House tonight.

The White House celebration of Memphis Soul music in the East Room – which included special guest appearances by Queen Latifah and Justin Timberlake – is likely to rile Obama’s Republican foes.

It’s so encouraging President Obama “took the time” to enjoy the show. Someone should be having some fun. 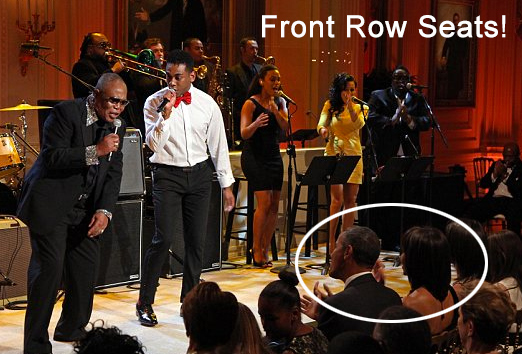 The Latest from the Ministry of Truth

“Q) How do you get a Democrat to pay their taxes? A) Nominate him to a cabinet position.”

For John Kerry: At what point does North Korea become a nuclear power?
Scroll to top