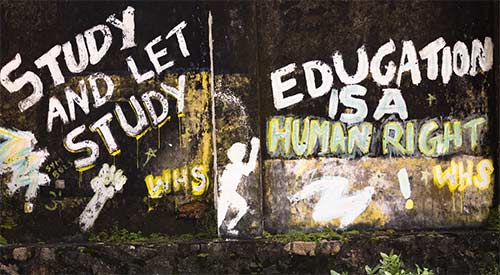 For years, I’ve been advocating the complete shutdown of the U.S. Department of Education. In the United States Constitution, funding of education is never mentioned or implied, but for 35 years federal government has been handing out cash to states and school systems in return for capitulating to prescribed standards and rules created by federal bureaucrats. Now President Obama wants to offer up “free” college education.

When I propose the U.S. Department of Education be shuttered, people first think I’m nuts. But I remind them every school in our communities has a school board, every town and city has their own Department of Education and if not, they have one at the county level. Those towns, cities and counties also have their own massive education budgets. In the town of Windsor, Connecticut, the top line of the budget is the Board of Education, and its budget is more than twice that of the town’s remaining operating budget.

Then we have the state’s Department of Education. Yup, there are 50 of those – or 57 depending on who you ask. In Connecticut they spend $3.5 billion dollars a year.

These state and local government departments are filled with education experts; teaching experts and administration experts. A significant number of the teachers have advanced degrees and many have doctorates. Why the heck do we need a group of federal bureaucrats – filled with their own collection of employees with advanced degrees and doctorates – to pick “winners and losers?” This group comes up with rules and regulations – think No Child Left Behind, Race to the Top, and Common Core – states and local governments must follow to “win” funding.

Are the federal bureaucrats so much smarter than those teachers and administrators at the local and state level? Of course not. The creation of the U.S. Department of Education was to incrementally move control of the education system away from the states and local communities to the federal government. Centralized planning ya know?

Now, Obama has proposed two free years of college to everyone in the country who completes high school.

President Barack Obama will need the approval of Congress to realize his proposal for making two years of community college free for students.

So far, that plan doesn’t have an official price tag — other than “significant,” according to White House officials. If all 50 states participate, the proposal could benefit 9 million students each year and save students an average of $3,800 in tuition, the White House said.

But administration officials insisted on a call with reporters Thursday evening that “this is a proposal with bipartisan appeal.”

Come now… how could you NOT support this? If you’re against the program, you must hate these kids who want to go to college, but just can’t afford it. I’m certain someone will call me racist for my strong stand against this program and the U.S. Department of Education. I still say NO.

Today, Obama and his entourage is heading to Tennessee to stump for his proposal. (He’s still on his never-ending campaign tour.) Why is the president heading to the Volunteer State?

So if the state can do it, the federal government can do it better? Look, I have no issue with Tennessee coming up with and funding this program. We have 50 great states, and those state governments – and their people through the State Legislatures – have significantly more power to do this kind of stuff as compared to the federal government. The federal government’s role is explicitly limited by the Constitution, leaving all laws, regulations and powers not specifically enumerated to the states. Let me remind readers once again about the Tenth Amendment to our Constitution.

What could be more clear? Our states can be, and absolutely must be, great incubators of ideas when it comes to the operation and funding of government. This applies to everything from education to health care, to energy, to housing, to agriculture, to the environment. All federal departments that should be shuttered. In May of 2012 I referred to Mitt Romney’s presentation on health care.

You’d be surprised at how open I [Steve] would be to letting the states and the people – state legislatures – make decisions on how to approach the health care issue. As Romney points out in his presentation, the states can be laboratories of democracy (my terminology has been “incubators of ideas”) and the competition between the states would be a constant motivator to come up with the best solution possible.

Fifty states, all competing and working to find a great solutions for their own state while at the same time encouraging other states to do the same. What a concept … and quite honestly a founding goal of our Founding Fathers.

Update: Although the Obama administration would not put a price tag on this proposal, one estimate is $34 billion per year. Actual budget appropriations for U.S. Department of Education budget in 2012 and 2013 was about $40 billion per year. That would be an 85 percent increase in one year.