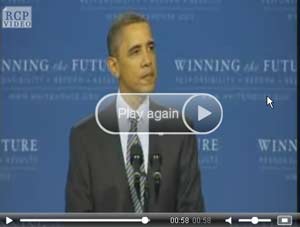 How many times have we reformed the education system in the United States? How many billions have been thrown at the problem? In Boston yesterday, President Obama asked for more reform and more money to solve the education woes.

“People started to realize what is needed is not either, or — not either more money or more reform, it’s both and. Both more money and more reform,” President Obama said at a technology school in Boston on Tuesday.

Click on the image to watch the video over at RCP, but this quote at the end grabbed my attention. Obama wants to have education leaders who “get more flexibility in exchange for accountability.”

Huh? I guess he’s knocking the federal mandates tied to accountability, but how are you supposed to measure success (accountability) so they can have more flexibility without defined measures of success (mandates)?

Didn’t the late Sen. Kennedy (D-Mass.) and President Bush (43) solve the issue with No Child Left Behind? This top-down approach we’ve been pushing for years does not work. We’ve been throwing billions and billions at education and what do we have to show for it? Status quo at best.

How many more reforms do we need? How about getting the federal government completely out of the education business and allow the states to deal with it exclusively.

If the states need more funding for education … raise the state and local taxes. If a state wants to get out of the education business and privatize the entire system, I’m totally cool with that.

Set standards, reform and funding by the federal government just screws everything up for everyone.

Obama Wants You To Cling to Government, Not Religion