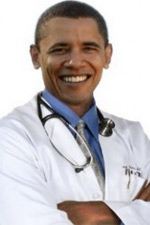 Yup, that’s right. After spending months ensuring the American people the health care individual mandate is certainly not a tax, the Obama administration’s Department of Justice has gone to court in defense of their mandate, arguing the mandate is a tax.

I do realize that I’m about 72 hours behind the curve on this story but I thought it was worth discussion, so add your comments below.

The original plan was to argue Congress had the authority to regulate interstate commerce, hence the ability to set the individual mandate to demand everyone have or buy insurance. If not, they would be “fined” a specific amount. The right argued this was a tax, where those on the left and everyone trying to sell the plan assured the American people this was not a tax.

The entire thing was a scam, to keep the Obama political machine from having to admit they were raising taxes on everyone, not just those earning more than $200,000, $250,000, or whatever today’s figure is. Never mind the fact the bill has already made changes to Health Savings Accounts and Flexible Savings Accounts that immediately taxed just about everyone – including myself – that takes advantage of those plans.

So now, to help themselves out of a various state lawsuit pileup, the Obama administration is going to court with the defense the mandate is a tax.

Ken Blackwell and Ken Klukowski from BigGovernment have the update.

For months, Team Obama has been saying that the individual mandate is authorized by Congress’ power to regulate interstate commerce found in the Commerce Clause. We explain in the book why that argument is a loser in court, and that the White House would have to pull a bait-and-switch and suddenly argue that the mandate is a tax (violating Obama’s promise not to raise taxes on anyone making less than $250K per year).

Looks like we were right. In their first filing against the multi-state lawsuit challenging Obamacare, Team Obama is now arguing that the individual mandate is… a tax.

On July 18, Ed Morrissey at Hot Air pointed us to a New York Times article on the, oh-by-the-way, it’s-really-a-tax argument by the Department of Justice. Robert Pear writes…

Administration officials say the tax argument is a linchpin of their legal case in defense of the health care overhaul and its individual mandate, now being challenged in court by more than 20 states and several private organizations.

Under the legislation signed by President Obama in March, most Americans will have to maintain “minimum essential coverage” starting in 2014. Many people will be eligible for federal subsidies to help them pay premiums.

In a brief defending the law, the Justice Department says the requirement for people to carry insurance or pay the penalty is “a valid exercise” of Congress’s power to impose taxes. …

While Congress was working on the health care legislation, Mr. Obama refused to accept the argument that a mandate to buy insurance, enforced by financial penalties, was equivalent to a tax.

“For us to say that you’ve got to take a responsibility to get health insurance is absolutely not a tax increase,” the president said last September, in a spirited exchange with George Stephanopoulos on the ABC News program “This Week.”

When Mr. Stephanopoulos said the penalty appeared to fit the dictionary definition of a tax, Mr. Obama replied, “I absolutely reject that notion.”

For additional reading, take a look at Randy Barnett’s post at Volokh Conspiracy. A taste…

If the Commerce Clause claim of power were a slam dunk, as previously alleged, would there be any need now to change or supplement that theory? Maybe the administration lawyers confronted the inconvenient fact that the Commerce Clause has never in history been used to mandate that all Americans enter into a commercial relationship with a private company on pain of a “penalty” enforced by the IRS. So there is no Supreme Court ruling that such a claim of power is constitutional. In short, this claim of power is both factually and judicially unprecedented.

And the reminder video. It is a tax, always has been a tax, and we told you it was a tax. And by the way, we think it’s completely unconstitutional as well. Want to do something like this? It must be done exclusively at the state level to pass Constitutional muster.

Obama and Ted’s Universal Health Care – Change we can Live with?

Like big oil and big insurance, Fox News is now a legit target for the left
Scroll to top