Maybe the fool will resign, but I doubt it. The National Republican Congressional Committee (NRCC) points out even though U.S. House Rep. Kurt Schrader (D-Ore.) called out President Obama’s “you can keep your plan, keep your doctor period” promise as “grossly misleading,” Schrader himself made the exact same promise to voters, multiple times!

From the NRCC website, we’re reminded what Schrader said during a video interview with Laural Porter, from KGW News Channel 8 in Portland.

Schrader said he knew policies changed all the time. He is trying to re-write is own historical statements. He used the term “grossly misleading” at least twice in the interview. 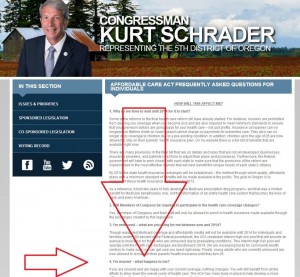 Well guess what his website said up until a few hours ago?

If you are insured and are happy with your current coverage, nothing changes. You will still benefit from all the efforts to drive down the overall costs of health care. The ACA has many tools in place to help develop a more efficient health care delivery system focused on quality of care, not quantity of care.

That page seems to have been scrubbed from Schrader’s website, but there is still a PDF document that was updated on April 12, 2010 with his summary of health care reform. It includes these sentences on page 2,, in the third paragraph. (They will scrub that soon, so I grabbed it and have the full PDF for you here.)

If individuals like their current plan they may keep that plan for as long as they would like under the final proposal. These grandfathered plans will have most of the same consumer protections added as in the newer qualified plans.

Why is Schrader changing his tune? Well just like every other House Democrat along with a bunch of Senate Democrats … he’s up for election less than a year from now.

“Shoveling Lies” and why you need to throw them out.
2 replies