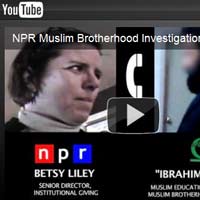 New Project Veritas video from James O’Keefe highlighting more head-banging stupidity from an NPR executive. Specifically, we’re talking about Betsy Liley who is the senior director of Institutional giving. We’ve got more than 44 minutes of audio to go through here.

I’m speculating that Liley is done at NPR, but she may have come clean to executives after the first video was released a few days ago. Exactly how far will public broadcasting executives go to keep their high-paying jobs, high-end equipment, 200 seat theaters and beautiful people status?

Right up front here … Liley did not offer any sort of support for terrorism or anything even close. This is not a pay-to-play agreement in my opinion. She suggests general support and maybe support for the news desk or the international desk.

The problem here is the faux-organization represented was tied to a terrorist supporting organization, and NPR seems more than willing to have a lot of detailed conversations with them while they were being “vetted.”

We can shield you … no paperwork … anonymous … never identified …

At about 37 minutes into the audio, the actor and Liley are discussing if it would be appropriate for a group to accept donations from felons and other suspicious types. The actor asks … “are you suggesting that NPR is considering not accepting … contributions from us?” Liley says, “Oh, no, no, no … I’m talking about Purdue” where Liley previously worked.

Proof (or at least compelling evidence) that my theory about Vivian Schiller’s firing is sound? Maybe Liley came clean to management about her e-mail exchange with “Kasaam” after the first video was released and the board of directors figured immediate action was necessary to limit the damage. Although in that case, er, why would they issue any statements insisting that they “repeatedly refused” to accept Kasaam’s check? That only makes them look worse in hindsight.

From The Daily Caller.

Kasaam follows up by asking: “The fact that NPR is not only a tax-exempt organization, but also receives direct contributions from the government — does that invite some sort of government oversight or government examination of contributions, et cetera?”

Liley answered: “They have audited our programs at times and, I think, as part of that, they can look at our audited financials. If you are concerned in any way about that, that’s one reason you might want to be an anonymous donor. And, we would certainly, if that was your interest, want to shield you from that.”

Big Journalism is calling it NPR’s Watergate moment, with my emphasis in bold.

Just like in Watergate, where the initial players tried to write-off the scandal as a “third-rate break-in,” the bigger story lies in the power wielded by executives trying desperately to cover their tracks and pretend they didn’t do something extraordinarily odious.  We are witnessing a cover-up.  An effort designed to disguise the fact that National Public Radio was very seriously intending to receive an anonymous donation from a front group dedicated to spreading Sharia around the world and was associated with a known terrorist organization.

… and grant them anonymity during the entire process.

[Admin’s note: There has been an issue with the publication of this post for some reason and some of the original content was missing. That in mind, more information was “recalled” from a previous revision of the post.]