Since my original post on the subject was long, corrected and updated multiple times – confusing even me – I needed to write a shorter post to clarify. I made a solid effort to update the orignal, but here’s the needed follow up.

Note: I’m not a lawyer, so if you have questions ask a lawyer. Don’t ask a politician, blogger, journalist or anyone in law enforcement.

§ 265.36 effective March 16, 2013 makes possession of the large capacity magazines (more than 10 rounds) that were previously lawfully owned prior to the 1994 ban a Class A Misdemeanor. There may be some sort of grace period involved, but after you are informed, you need to turn it in or sell it to someone out-of-state within 30 days. 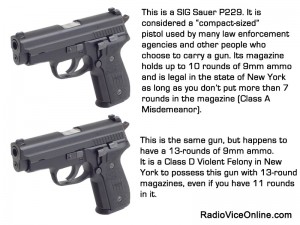 That said, § 265.02 – Criminal possession of a weapon in the third degree which is a Class D Violent Felony – still applies and has been updated to clarify the eight, nine and 10 round magazines do not meet the definition of large capacity magazine affected by § 265.02. This law applies to those in possession of large capacity magazines with 11 or more rounds that were not part of the pre-ban 1994 magazines dealt with in § 265.36. The image I have to the right in this post is correct. If you own a P229 with a 10 round magazine, downloaded to seven rounds you will be legal. If you have the same gun with a standard 13 round magazine that was not grandfathered in 1994, you’re subject to a Class D Violent Felony charge. New Yorkers should not have been able to buy that 13-rounder, but if you purchased it elsewhere and brought it in, you’d be in violation.

Now, on to a sample of laws that are Class D Violent Felonies, which New York equates to having a 13-round magazine filled to capacity, or that same 13-round magazine downloaded to 11 rounds. This is the lede of the story here, and shows the stupidity of the laws. Again, I’m convinced they continue to identify ownership of large capacity magazines as a felony so people charged will be tempted to plea to a misdemeanor instead of going to court. They don’t want a Supreme Court test case.

These are samples of Class D Felonies. (One step below Class D Violent)

These are samples of Class E Violent Felonies. (One step below Class D)

These are samples of Class E Felonies. (One step below Class E Violent)

UK think tank thinking… If we all carried a gun

What We Believe Part 5 – Gun Rights

Bob Costas backpedals on gun control through a spokesman
3 replies

The Department of Peacebuilding

Feinstein: “All the police” support my assault weapon ban
Scroll to top