Another tragedy for the victims of a violent act. Maksim Gelman allegedly used a knife to first kill his stepfather, then drove to an ex-girlfriends house where he killed her mother and the ex-girlfriend. He went on to kill two more and wound at least four others. I realize it’s a cliché now, but why isn’t Mayor Bloomberg calling for more restrictions on the sale of knives?

Gelman allegedly killed four, but he could have easily killed more with a collection of up to four, large kitchen knives he transported with him from place-to-place during a 28 hour period. 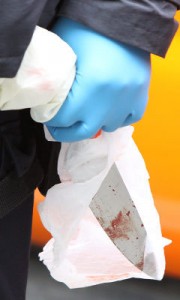 Those killed include Gelman’s stepfather Aleksandr Kuznetsov, 54. Anna Bulchenko was killed next. Bulchenko was the mother of Yelena Bulchenko, Gelman’s ex-girlfriend, who would be killed next. The known criminal – who had 10 prior arrests – then stole a car and hit and killed Steve Tannenbaum in Brooklyn.

Early yesterday morning, the disturbed fellow killed another random person on a subway train. As of yet, we have seen little information in the media about the victims.

You can read more at The Daily News and the New York Post, but my guess is you’re not going to hear much about the killing of four people by someone who was mentally unstable. Heck, not even one of the most popular conservative blogs have mentioned the story. The Huffington Post posted an out-of-the-box AP story. A search on Bulchenko or Gelman came up with zero result at Daily Kos. Democratic Underground? Nothing. Zilch.

You have to wonder … if Gelman had used a firearm…

Thankfully, these types of incidents are very rare in our culture, but some tragic events like the Columbine shooting, Virginia Tech massacre, and the murder of six and attempted assassination of Rep. Gabrielle Giffords (D- Ariz.) last month, seem to garner the hours and hours of live coverage across the nation.

We did not see the constant coverage about the events that took place between 5 a.m. on Friday and 9:15 a.m. on Saturday.

After five days or so, the discussion moved away from mental illness and back to gun control. A firearm, just like a knife or baseball bat, can be used for good or evil. It’s up to the individual who carries those tools to determine whether they will be used to slice a tomato, or kill a person.

There will be those who will speculate lives could have been saved by someone who was carrying a pistol for self defense. Even if New York City had a policy that allowed law-abiding citizens to carry a weapon, I certainly would not say this disturbed idiot could have been stopped. We’ll never know.

What we do know is that for everyone, especially a female, carrying a personal defense sidearm and being trained how to use it can most definitely be the great equalizer when being attacked by someone, and we need to remember that.

Say a prayer for the families of the victims who have been killed, and those recovering from injuries.