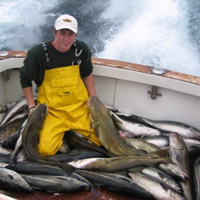 I’m not familiar with the commercial fishing industry in New England, but I thought this was a pretty big story. The New England Fishery Management Council drastically cut the amount of cod commercial fisherman can harvest offshore.

At a meeting in Portsmouth, New Hampshire, the New England Fishery Management Council voted to slash the legal harvest of cod in the Gulf of Maine by 77 percent to 1,550 metric tons for the fishing season beginning May 1, said Pat Fiorelli, a spokeswoman for the council.

“It’s really grim,” said Fiorelli. “These stocks are in real decline and questions were raised about whether they’ll ever come back.”

It also cut the quota for cod caught on Georges Bank, an area stretching east of Cape Cod, by 55 percent to 2,002 metric tons. The new quotas will be in effect until 2016.

For a commercial fishing operation with one or two boats, this is huge and will result in bankruptcies. Some operations with 20 or more boats are claiming they will shut down. Commercial fisherman in New England are not known for big houses, nice cars and full bank accounts. When you have a “good season” it’s almost a certainty you’ll have a major boat repair come up at the start of the next season. From Fox News.

The cuts hit an industry that was crucial to the nation’s early economy and remains imbued with the risk and romance of man versus nature — depicted in the famous “Man at the Wheel” statue in Gloucester of a fisherman facing the sea.

The new low limits reduce the cod catch to just a fraction of what it once was and prevent fishermen from landing more plentiful species, such as haddock and pollock. That’s because fishermen can’t pull up the healthier groundfish without catching too much of the cod that swim among them.

The question is … are there really that few fish?

Fishermen have consistently disputed the accuracy of the science that drives regulation and that indicates the stocks are in bad shape. And they noted the industry has generally fished at or below levels recommended by science in recent years, but the advice has proven wrong.

The government bureaucrats come in and give the commercial fisherman “advice” to help ensure the industry remains stable so people can keep fishing, working and earning a living. They tell the fisherman to limit their catch to – as an example – 1,000 metric tons of cod per year. The fisherman heed the advice of the government and fish at or below those levels because they want to keep working and earn a living in the future. Then they show up to a meeting and have the rug pulled out from under them.

We’re from the government and we’re here to help you.

Symptom of the Disease: Candidates for president spent $7 billion on 2012 e...
Scroll to top