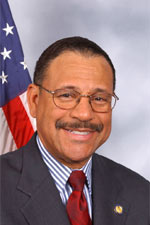 Rep. Sanford Bishop (D-Ga.) provided thousands of dollars of Congressional Black Caucus (CBC) scholarship funds to his stepdaughter and niece. The funds are not derived from federal tax dollars, rather private donations filtered through the CBC.

Bishop’s excuse … the CBC did not have any rules excluding family members from receiving the scholarships back in 2003 and 2005.

From Politico, with a hat tip to Ed Morrissey at Hot Air.

In 2003, Emmaundia Whitaker, the niece of Vivian Creighton Bishop, who is Bishop’s wife, was awarded an education scholarship. She was also given a similar award in 2005.

And in 2003, Aayesha Owens Reese, the congressman’s stepdaughter, was granted an education scholarship as well.

The congressman’s wife, is a longtime state employee in Georgia. She currently serves as clerk of the municipal court in Columbus, Georgia.

A Bishop spokesman insisted the Georgia Democrat did not violate CBC Foundation rules that were in place at that time by awarding scholarships to family members.

“It is our understanding that the CBC Foundation in 2008 revisited the guidelines and processes for its scholarship programs, and as such included language to clarify that CBC family members are not eligible to receive the scholarships,” said Ashton McRae, Bishop’s spokesman, in a statement released by the office. “These scholarships … were awarded prior to 2008.”

Bishop’s nepotism did not stop at handing out scholarships to family members. Aayesha Owens Reese (Bishop’s stepdaughter) and her husband were hired by a youth program funded by a federal earmark (pork) sponsored by Bishop. Reese also worked for working in the Fulton County District Attorney’s office last year, we’re not sure what she did. This is a Howie Carr hack-o-rama extravaganza!

Bishop was also caught up in a scandal in 2009 when the Georgia Bureau of Investigation began a probe into whether a youth program operated by Muscogee County Marshal’s Office improperly spent federal funds after it hired Bishop’s stepdaughter and her husband. Bishop had earmarked more than $190,000 for that youth program.

Reese and her husband, Stephen, were paid more than $14,000 by that program, although they lived in the Atlanta area, more than 100 miles from Columbus, where the program operated.

The GBI later ruled that the hiring of the pair was legal.

Of course it was legal. That’s the thing with ethics abuses, they can be legal and smell really bad.

Johnson (D-Texas) repaid $31,000 to the foundation last week after the Dallas Morning News reported that she had steered 23 scholarships to relatives and the children of a top staffer.

Symptom of the Disease: Liberal professor dumbfounded about support for McDaniel in Mississippi

Symptom of the Disease: Axelrod still getting paid by Obama’s marketing firm
11 replies

Rebuilding at Ground Zero will take longer than construction of Panama Cana...
Scroll to top