President Bush has remained characteristically quiet during President Obama’s first term. It used to be the norm and is demonstrative of his class. This despite the constant whacks the young President has been taking at his predecessor, apparently in the name of deflecting criticism and bolstering his falling poll numbers. But, given the young President’s wildly liberal (and yes socialistic) policies, this billboard sums up beautifully how many of us feel. Via John Hinderaker over at Powerline. This is billboard in Minnesota, and yes it’s real. But the realy funny part of the story is how it was treated by NPR. John reports they are baffled. Go to Powerline to read John’s take because … well … he’s right. 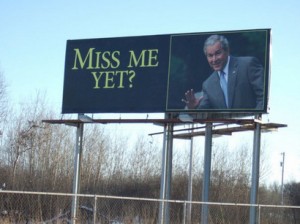 I am not so partisan to believe that more and more people, disenchanted with the Obama’s far left agenda are suddenly wishing for the return of President Bush, but given the direction Obama is taking the country, yes, I do long for the good old days.

UPDATE: Here’s video of CNN’s coverage of the billboard, via Jim Hoft.

‘Miss Me Yet?’ Billboard With Photo of George Bush is Real
by burghnews

One more thing. This current President has become famous for striking out at people who can’t strike back, leveling criticism at public officials and others in venues that don’t allow his opponents a chance to defend themselves. He has used this to his advantage in going after “W”, but Bush is not his only target. The Supreme Court episode, Fox News, The Republican confab, even reporters covering his staged events.

I offer these two audio bite’s from CNN’s Reliable Sources from last Sunday. The reporter talking is Chip Reid of CBS News.

Miss me yet? The United States Constitution

Reagan didn't need to be tested

Don't expect the media to be unbiased
4 replies