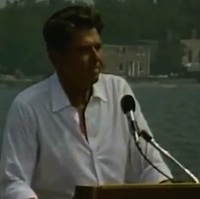 Heard a portion of this on Rush yesterday. Saw a longer segment on Jim Hoft’s site. Then read the entire speech at American Rhetoric and now I pass it on to you. Ronald Reagan’s greatness shines brightly in this campaign speech given on Labor Day in 1980. He takes on Carter head on. Video below and a relevant portion of the transcript.

It’s worth watching or at the very least reading the entire speech. But here are some segments that I found pointed and perfect. I mean, you could take this speech and deliver it today, almost word for word.

Today a President of the United States would have us believe that dream is over or at least in need of change. Jimmy Carter’s Administration tells us that the descendants of those who sacrificed to start again in this land of freedom may have to abandon the dream that drew their ancestors to a new life in a new land.

You’re right. The Carter record is a litany of despair, of broken promises, of sacred trusts abandoned and forgotten. Eight million — eight million out of work. Inflation running at 18 percent in the first quarter of this year. Black unemployment at 14 percent, higher than any single year since the government began keeping separate statistics. Four straight major deficits run up by Carter and his friends in Congress. The highest interest rates since the Civil War, reaching at times close to 20 percent, lately they’re down to more than 11 percent but now they’ve begun to go up again. Productivity falling for six straight quarters among the most productive people in the world.

Through his inflation he has raised taxes on the American people by 30 percent, while their real income has risen only 20 percent. The Lady standing there in the harbor has never betrayed us once. But this Administration in Washington has betrayed the working men and women of this country.

The President promised that he would not increase taxes for the low and middle-income people, the workers of America. Then he imposed on American families the largest single tax increase in our nation’s history. His answer to all this misery? He tries to tell us that we’re “only” in a recession, not a depression, as if definitions, words, relieve our suffering.

Reagan went on to say, he should probably stop there, laughed and went on. Here’s a bit more.

Let Mr. Carter go to their homes, look their children in the eye and argue with them that it’s “only” a recession that put Dad or Mom out of work. Let him go to the unemployment lines and lecture those workers who have been betrayed on what is the proper definition for their widespread economic misery. Human tragedy, human misery, the crushing of the human spirit; they do not need defining, they need action. And it’s action, in the form of jobs, to lower taxes, and an expanded economy that as President, I intend to provide.

Now, call this human tragedy whatever you want. Whatever it is, it’s Jimmy Carter’s. He caused it. He tolerates it. And he’s going to answer to the American people for it.

or as Michelle Malkin calls him “McCain on Wheels.”

Huntsman is the latest no-labels flavor of the month, a straw man of the same people who have spent the past year smearing entitlement reformers as senior citizen-killers, budget hawks as Hitler’s spawn, border-security activists as racists, and leading GOP women as sluts, nuts and bimbos.

Just like the failed 2008 GOP contender whose consultants are now fueling the Huntsman bid, McCain 2.0 is a big-spending accommodationist more in tune with the Democratic elite than with the conservative rank-and-file. In the shadow of the Statue of Liberty on Tuesday, Huntsman assailed the current economic crisis overseen by the Obama administration as “totally unacceptable” and “totally un-American.” Yet, Huntsman retains nothing but “respect” for his former boss in the White House and laments the loss of “civility” wrought by “corrosive” political debates.

Senator, You Are Scaring Me

Reagan didn’t need to be tested

How much is Chicago paying for police bodyguards to protect aldermans?
Scroll to top