Rich, but certainly not surprising. A few bloggers have pointed out the libelous reporting/commentary being dished out by 501(c)(3) group Media Matters for America concerning one of Glenn Becks reports on the recent ACORN videos. At the same time, Media Matters is complaining that House Speaker Nancy Pelosi (D-Calif.) is being “misrepresented” by the media.

You’re not going to get any argument from me refuting the conservative bias of a good portion of the Fox News on-air personalities, but come on. Media Matters cuts out the portion of Beck’s commentary – where he clearly states they have not been able to confirm the ACORN employees – and they cry fowl? 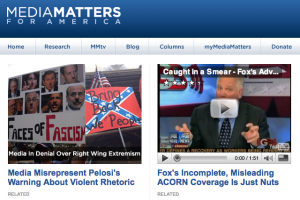 Then, they have the guts to claim about the treatment of Pelosi’s statements at the end of the week on their home page this weekend? (Click on the screen shot to see full size.)

Wizbangblog has the full Beck transcript and highlights exactly the sentence Media Matters cut out of their own video production.

When I watched the video Media Matters ran I immediately knew what was up because they chopped Beck’s commentary to bits and curiously left out the part of it that completely contradicts their claim. I looked for the Beck video at YouTube to make sure I was not misremembering his commentary and here is a transcript of what I found.

Glenn Beck: This is twisted, bizarre, macabre. I mean, is this theater? I’m not a lawyer. I’m not a jury. Um, but gosh even to me it seems like this is a potential admission of murder and the way she was describing doing some groundwork beforehand, you know so everyone in town knew exactly what was going on, a case might be made for premeditated murder. In fairness, I don’t understand people who stay in abusive relationships. I don’t. I get it. I get it. And maybe a jury might conclude that it was justifiable homicide. I don’t know but we haven’t been even able to confirm from the state of California whether Theresa’s husband from ten years ago was killed. Or if he’s dead. Or if she even had a husband. Did she make the story up? I don’t know. Nobody is asking questions. See if the mainstream media will follow this one. This is shocking. It raises serious questions about what is going on inside of ACORN.

I italicized the portion of the commentary Media Matters provided to their readers in the mishmash video they put together. The parts they omitted are not italicized. I put in bold the part of Beck’s comments that directly contradict Media Matters post. It is not like the comments were made in a different Beck show, or even in a different segment of Beck’s show. They were part of the same paragraph if you look at the commentary in written transcript.

As a reminder, Media Matters promotes themselves as “a Web-based, not-for-profit, 501(c)(3) progressive research and information center dedicated to comprehensively monitoring, analyzing, and correcting conservative misinformation in the U.S. media.”

It seems they also are dedicated to releasing liberal propaganda and distributing their own misinformation about the main stream media.

Others blogging on the subject this weekend include Gateway Pundit and Hot Air.

Good for thee … but not for me