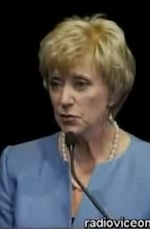 The subheading on this one should be “Shhhhhhhhhhhh”. Feisty crowd, feisty McMahon and a Blumenthal who pretty much put me to sleep. But there were some classic moments, as you’ll see.

I’ll have another post later but here’s a quick recap. Right out of the gate Blumenthal was asked one more time about how jobs were created. A little more lucid this time but government is still the answer. McMahon’s retort, and I’m paraphrasing … nice to know you’ve been working on your answer Mr Blumenthal.

But I think the best was saved for last. As you’ll hear Blumenthal lights the fuse when he claims he can’t be bought by the special interest campaign contributions he’s taken. “The people of Connecticut know me.” It was all Linda needed to hear … Paraphrasing, “Indeed they do.” It was off to the races for everyone including the crowd.

The middle portion is Blumenthal’s denial that he supported cap and tax. The answer is weak, but the fireworks follow at 3:30.

UPDATE: I realize the video in context is a bit long and Blumenthal begins his rant on cap and trade … so I have produced a shorter version cutting out the cap and trade and stays on point. You have both as we always look to stay in context, but if you are looking to save time … the money section is below.

They are “magically” dangerous.

Obama certain US Chamber of Commerce is threat to our democracy

A Potemkin Presidency
Scroll to top