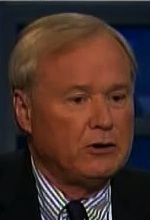 Heh, I’m not sure this is top news … but, well another example of post racial MSNBC. Should I laugh or should I cry? Even Eugene Robinson could not contain his laughter as Matthews poses his feel good racial question to newly deposed RNC Chairman Michael Steele. The man who almost forgot Obama was black … strikes again.

It’s Matthews Martin Luther King Day show with three African Americans on the set at the same time: WaPo’s Eugene Robinson, Congresswoman Donna Edwards and of course Michael Steele. I am not sure what possessed Matthews to ask the question but no one on the panel took him seriously at first … until Steele suddenly realizes Matthews is serious. So … where does this one stand on the “Matthews Meter”? Better than the thrill? Better than”I almost forgot he was black”? Better than “Are you a member of the planet of the apes”? Better than ….. oh never mind.

And while we are on the subject. Matthews finally takes a moment to explain what he meant by Obama gave him a thrill up his leg. I think this means it’s the same as saying you Republicans miss Ronald Reagan or something.

Looking for a refresher course. Here is is.

And here he is forgetting Obama was black … almost.

Ahh Chris … you are entertaining. At least you made Steele laugh.

I’ll tattoo Obama on my chest!

Matthews to Wall Street: No money unless you can explain why you have it