Governor Malloy thinks that congress is crazy for failing to approve a long term transportation bill that would help fix
update roads and bridges right here in Connecticut.  On the plans are the replacement of the I-84 corridor in Hartford.
Projects already slated to begin work are the Q-Bridge, The Moses Wheeler Bridge and of course the Bus-way from New Britain to Hartford.

Malloy  said, “ It is irresponsible.  Unemployment does not seem to frighten people in Washington as it does in my home state of Connecticut.  The cloud of short term that now funds the building of roads and bridges makes it very difficult for the Connecticut Department of Transportation to plan or move forward on new projects, such as the replacement of the I-84 viaduct that runs through Hartford. ”

Our own Senator Blumenthal, has jumped on the bandwagon of blaming Republicans for
this fiasco.  He spoke in front of construction workers at the site of the Long Wharf Project
to urge passage of a long term transportation bill.

It seems to me that the State of Connecticut should begin prioritizing what is important.
Is it a Bus-way or is it pot holes and bridge repair? 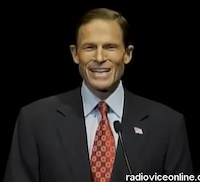 WWE Shirts … yes we can
6 replies

Obama, The Economy is Just fine…How about another stimulus! video add...

The Warning of David Stockman – video added
Scroll to top