By no means will I suggest this film is a documentary without bias, but if you think Al Gore’s “documentary” was without bias you may be nuts. Tonight at 8 p.m. ET is the online live premiere of Not Evil Just Wrong. The film reveals the true cost of Global Warming – re-branded “climate change” – hysteria. 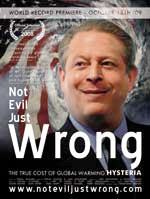 Below, I have what I think will be the live stream of the featured-length film and the following discussion panel with the films directors and experts. They will be taking questions from all over the world from what I understand, something Al Gore refuses to do.

The film will specifically tie climate change decisions to economic effects around the world. Quite honestly, whether you’re talking health care or global warming government mandates, it is all about control, and the continued loss of liberty and freedom.

Come back to Radio Vice Online to hang out and watch the premiere. Below the video embed, I’ve posted the official uStream chat box for the premiere and the film’s synopsis. You’ll need to be a registered user at uStream to participate in the chat.

From the Not Evil Just Wrong Web site.

Global warming alarmists want Americans to believe that humans are killing the planet. But Not Evil Just Wrong, a new documentary by Phelim McAleer and Ann McElhinney, proves that the only threats to America (and the rest of the world) are the flawed science and sky-is-falling rhetoric of Al Gore and his allies in environmental extremism.

Not Evil Just Wrong warns Americans that their jobs, modest lifestyles and dreams for their children are at stake. Industries that rely on fossil fuels will be crippled if the government imposes job-killing regulations on an economy already mired in recession. Small towns in the heartland, like Vevay, Ind., will become bastions of unemployment and poverty. Breadwinners like Tim McElhany in Vevay will lose their jobs — and will have to start borrowing money again just to buy bread for their families.

The damage that would be wrought is unjustified by the science. Not Evil Just Wrong exposes the deceptions that experts, politicians, educators and the media have been force-feeding the public for years. Man-made pollution is not melting the polar icecaps. The ocean will not rise 20 feet in a flash. And the only polar bears dying because of man are the ones who try to eat men.

McAleer and McElhinney debunk what for a time was the environmental movement’s most powerful weapon of disinformation, the infamous “hockey stick” graph that attributed a supposedly unique burst of warming in the 20th century to humans. They also shatter the myth that the hottest years in the United States were 1998 and 2006. The hottest year was 1934, and the hottest decade was the 1930s — when there were half as many people and no SUVs or jumbo jets.

But environmentalists like actor Ed Begley Jr. and Leo Murray of Plane Stupid, who appear in the film, won’t tell you that. Instead, Begley sheds phony tears for ex-cons who are offered “green” jobs, and Murray decries air travel as the modern world’s worst indulgence. Their hysterical claims have fooled many people into believing that carbon dioxide, an element that is essential to life, is poison.

Organizations like Greenpeace, whose excesses are roundly condemned in Not Evil Just Wrong by founding member Patrick Moore, persistently push the same kind of propaganda that prompted world leaders to ban DDT. They believed environmentalist Rachel Carson’s doomsday scenarios about the mosquito-killing chemical, and millions of children in the Third World may have been infected by malaria and died as a result.

The documentary notes that the World Health Organization lifted its ban on DDT in 2006, but Al Gore and his allies will not accept that verdict any more than they will accept the science that discounts theories about global warming. They are determined to blame humans for everything.

Snow storms “create or save” more jobs than Obama administration