This is the disease. As you head for the polls this morning, I want you to think about the state of our union. Over the past five-plus decades we have allowed our freedom and liberty to be taken away from us in favor of central planning. For some reason, state after state, and voter after voter have made the decision that politicians and bureaucrats hundreds if not thousands of miles away in Washington, D.C. can do a better job managing our state governments, our schools, our health care system and more.

We’re just not smart enough, so we send them our money. We send them trillions of dollars – our wealth – with the promise of a better future, yet the inside-the-beltway crowd has failed us over and over and over.

So after sending our hard-earned wealth to our nation’s capital, thousands of state and local employees fill out grant request after grant request trying to prove to some middle-management type in an unknown federal department that we deserve praise; but more importantly grant money to help pay for more cops on the street, a new school building, a wider street, or some sort of mis-guided magic bus route.

I’ve been mentioning this for at least three years from within my Symptom of the Disease series here at RVO. Are you reading?

So how dependent have the states become on federal dollars in the form of grants … cash states don’t have to pay back to the feds? Well Jillian Kay Melchior over at National Review Online points us to the Pew Center on the States for the charts below. Melchior writes…

States now count on the federal government for $1 out of every $3 in revenue, according the 2010 Census… And $1 out of every $3 is just the national average: In Arizona, 46.9 percent of state revenue came from federal grants; in Louisiana, 48 percent; and in Mississippi, a whopping 49.6 percent.

If you think states like Texas get less funding as a percentage as compared to Connecticut  you’d be wrong.  Connecticut residents depend on the federal government for 25 to 30 percent, where Texas is getting 41 to 45 percent. Certainly each state has different needs, but this is not a Democrat/Republican problem, this is big government problem. 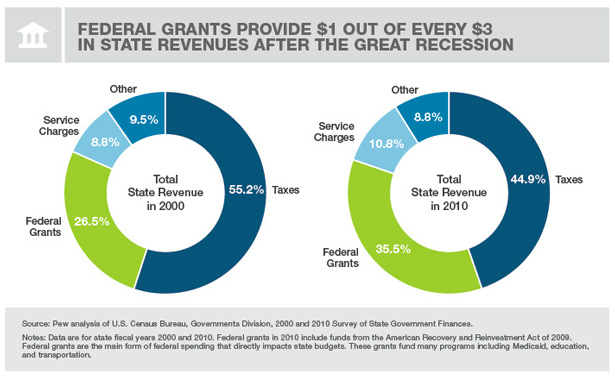 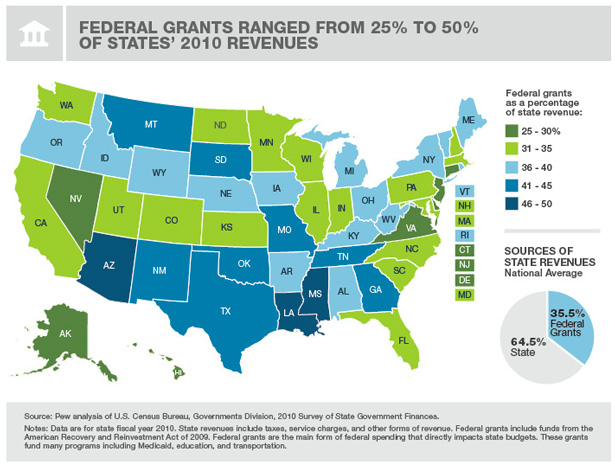 I’m really not comfortable Mitt Romney will solve this issue. I’m just hoping he’ll take one or two steps towards returning power to the states. When he is announced the winner of the election tomorrow evening, I’ll be holding him to a very high standard in regard to the size and scope of the federal government.

I hope you’ll join me in voting for Romney, celebrate for an hour or two, and move on to help guide our new president by holding his feet to the fire as we all support conservative ideals across our great nation.

Some states blocking Tesla from selling cars through stores

Summary of party affiliation and the election prediction contest