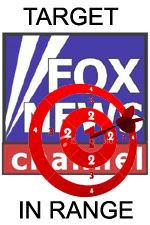 I’ve previously written how some large corporations are easy and safe targets for many on the left. In my opinion, big oil, big banks, big insurance – and during the last two years Fox News – are popular since the attacks play to their voting base, who seem to think they are always targets for getting screwed.

Of course, a good portion of those evil corporate identities who are out to get us are made up of thousands and thousands of friends and neighbors who actually work for those companies…

But no, those are the good people.

Fox News has clearly become one of the most effective targets for the left. I reviewed with amazement the entire Sherrod kerfuffle and noticed Andrew Breitbart was not getting attacked during the day, but Fox News was!

OK sure, Breitbart was getting a little bit of heat, but nothing as compared to during the ACORN story. Fox News was getting totally slammed during, when it turns out the network never mentioned the Sherrod story until almost 12 hours after Breitbart posted his article with the video. Even then, the only people who mentioned it on Fox was commentators … but not even Beck! Why? Few of the left’s subjects know who Andrew Breitbart is … but Fox News … ahhh yes … BIG target.

Fox is a great target since the network is considered a darling of the right, and there are very few people we live and work with who are directly associated the network. It’s a perfect target for the left to bash and blame!

Is Fox News perfectly unbiased? Hell no, but don’t even try to tell me the hard-news anchors at MSNBC, NBC, CBS, ABC or CNN even come close. Remember, most of the 24 hour news cycle is now commentators, not hard news by anchors. I understand that … does the left?

Of course, Fox News has absolutely nothing to do with increased insurance premiums, mortgage payments that can not be made, high unemployment, dwindling 401k plans, high energy costs or failing school systems … but that matters little to the left. The big, bad Fox News people are really bad for a America.

Who says so? Well just look at the JournoList story breaking the last couple of days by The Daily Caller; some suggest the FCC just not renew their broadcast license! A quick glance at the comments indicate many are commentators, but there is definitely hard news journalists chiming in.

Want to say some of the JournoList comments are taken out of context? Sure, go ahead … if it makes it all good with you, that’s cool. Us “fu*&^%g Nascar retards” won’t mind a bit.

[Edited to add] Certainly, commentators and bloggers who are conservative certainly do make fun of and target certain media personalities on broadcast networks … the difference is we are not the Executive or Legislative Branches of the federal government!

I had a discussion with my cousin this past weekend about health insurance. He owns a small IT company with about 200 employees and his premiums were going to be going up 30 to 40 percent. He was able to switch his employee’s coverage to another company, but still got dinged with a 20 to 25 percent increase.

Remember how the Los Angeles Times refused to mention why premiums were rising in California? Why is my story detailing how 95 percent of premium increases are directly from increased health care costs – and not insurance company profit – completely ignored?

It does not fit the playbook.

Media note to Special Olympics: It’s not about Rahm … it’s about Palin

CK to the Left: You scream raaaaaacist the loudest when you are losing the ...
Scroll to top