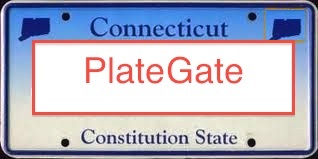 Republican State Chair calls for an investigation into the release of confidential motor vehicle registration information by the staff of Governor Dan Malloy. The GOP chief has asked the Chief State’s Attorney to determine who knew what, what did they know, and when did they know it. Not familiar with license plategate? No worries. A recap follows.

For those who missed this story, last week Kevin Rennie ran a story revealing that outgoing Republican Governor M. Jodi Rell, passed on exclusive numbered license plates to friends and family, before she left office.

The story, clearly meant to embarrass Rell and catch the state’s “every woman” in hypocrisy. has turned into so much more, because it is against federal and state statutes to release the info which is meant to be confidential.

So … a story that began as a Rell embarrassment has turned into a possible illegality on the part of the Malloy administration. As reported in the CT Mirror … it was Malloy’s chief of staff and an aide that responded to, and presumably gleefully agreed to do Rennie’s legwork.

Andrew J. McDonald, the legal counsel to Malloy, said the purpose was to respond to a media request. The administration’s top communication official, Roy Occhiogrosso, provided the list without realizing it was illegal to disclose the owners of the low-digit plates, he said.

“When the request came in, the response was based on an effort to be as open and transparent as possible,” McDonald said.

Occhiogrosso said that former state Sen. Kevin Rennie, a blogger and Hartford Courant columnist, requested the information after hearing that Rell had issued the sought-after plates.

“It never dawned on me I was being asked a question I wasn’t supposed to answer,” Occhiogrosso said.

The illegality of the release of the information was first reported by the Associated Press. The information is considered personal, though not “highly restricted,” the designation given to a motorist’s photograph, Social Security number or medical or disability information.

Ahh yes. The Geithner defense. I made a mistake. Governor Malloy’s response was almost as classic. A kinda … sorry we screwed up but you can have another plate if you fear for your privacy.

“If a mistake was made, we will gladly refund the money to any individual requesting it and promptly issue a new license plate,” Malloy said in an emailed statement.

Not good enough said Healy today, the state GOP head. We want a investigation to see if the law was violated.

State Republican Chairman Chris Healy said the chief state’s attorney should investigate whether Malloy’s administration violated the state’s privacy law, which prevents “any officer, employee, agent or contractor” of the Department of Motor Vehicles from releasing the information, with some exceptions. Violators can face a misdemeanor. Meanwhile, those who are qualified to receive the information must fill out a records request form. Violators of the federal law can face civil liability.

Here’s the point of this story. There are people in the Malloy administration who think nothing of violating privacy laws if it means embarrassing a political opponent. But it begs the question. If they are so cavalier with the law on a matter of not great import … what will this administration do to any of us when the real heat gets turned up? Something to think about my little Tea Party folk.

Connecticut tax revenue up … Until tax increases implemented 16 months ago

Planned Parenthood staff certainly use the word “confidential” a...