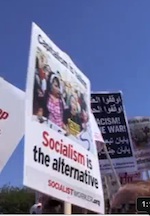 Hey, why hide it? They’re socialists and proud of it, proud to be bused in and listen to Harry Belafonte and Ed Schultz. Proud. And why? Because everyone deserves the money you’ve worked hard for. Oh, and guess who the enemy is? Why it’s the ….. Tea Party? Radicals and dangerous because nothing is more frightening than a Grandma and her grandchildren.

Two videos via The Blaze. The first is a gas from Americans for Prospertiy, detailing the number of socialist groups that supported the rally. Fun, fun, fun.

The second video from Gateway is Harry Belafonte admonishing America for it’s racist and sexist ways but he saves his best for the end … the Tea Party as villains!

Based on the pics it took a lot of union buses to get everyone in, but the AP described the crowd as sparse.

More than 400 organizations — ranging from labor unions to faith, environmental and gay rights groups — partnered for the event, which comes one month after Beck packed the same space with conservatives and tea party-style activists.

Organizers claimed they had as many participants as Beck’s rally. But Saturday’s crowds were less dense and didn’t reach as far to the edges as they did during Beck’s rally.

Some people described the event as a counter-protest to the Beck rally. Many mentioned the perceived racist  they see among the tea party-style activists, even though no one who spoke at the Beck rally neared anything approaching criticism of President Barack Obama or his race.

Congresswoman Schakowsky: Those Tea Party people actually believe in … the...