Nice. Just more proof there is absolutely no room in the liberal/progressive/socialist/statist halls of higher education for conservative views. The Pratt Institute does seem to be a private institution, so there is no censorship here that I can see, but don’t you dare suggest this school is open to discussion of various points of view.

Update: I actually did the same thing reader Forest did (scroll to the comments). I did not hear back from the school, but the response sent to Forest included “He has always been informed that he may exhibit any work that he chooses to”.

In my original post, I used the phrase “If true“, and my suspicion about this story has only increased. I’ve e-mailed Panero, the original author of the post.

Steve DeQuattro contacted James Panero about his experience at Pratt. Since he’s a conservative and is vocal about his opinion, he’s not well thought of. I’m not sure if the liberal students surrounding DeQuattro have made their opinion public, but he has.

DeQuattro notes his art work – he’s a conservative political cartoonist – has been excluded from a display scheduled for the end of next month prior to graduation. From the New Criterion, with a hat tip to Big Government.

As a senior in the school, Mr. DeQuattro has been working on this art in preparation for a group show for Pratt’s graduating students, which is scheduled to open on April 23. While his faculty advisor has been supporting him, his peers have not. Mr. DeQuattro says they recently wrote a letter to his professors, calling his work “offensive” and complaining about exhibiting alongside him. Last week, the chair of the fine arts department stepped in to prevent Mr. DeQuattro’s participation alongside the other students in the group show–an unprecedented move in the history of the department, says Mr. DeQuattro, despite the fact that none of his work is pornographic, libelous, or in violation of the laws of free speech. Mr. DeQuattro’s advisor did not return a request for comment.

For the administrators and students at Pratt, the problem isn’t political art itself, says Mr. DeQuattro, but the nature of his politics, which are conservative. He says his school takes a liberal position on politicized discourse, just as long as that discourse does not deviate from a left-wing position. Pratt’s opposition to Mr. DeQuattro’s art only underscores the importance of his work. Mr. DeQuattro is asking for outside help in convincing the institution to support his exhibition.

If true, just another example of the tolerant left.

I’d be interested in seeing more of DeQuattro’s work. but I could not find anything online. Here’s one example, click to enlarge (sorry about the low resolution). 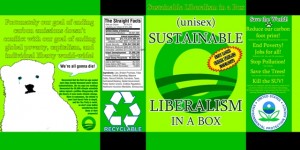 Are you up on your civics? Take the quiz!

Face it: they just don’t trust you….

Boston students still bussed,, but now it is based on school quality, not race
3 replies