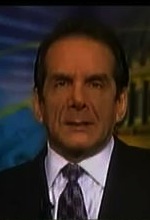 Well we’ve come to a crossroads my little mobsters and at state could very well be who controls Congress in 2012.Charles Krauthammer tries to make the case that the tea party freshman in Congress are conservatives gone mad.  If these young freshman says Charles, turn down the banner deal, they run the risk of taking on a bad economy, and handing the election to Barack Obama.

Charles Krauthammer, clearly one of the leading voices of conservatism today writes that he understands how tea party conservatives feel, but they only control one  house of government. And with the election in 2012 on the line, it’s time to face reality.

I have every sympathy with the conservative counterrevolutionaries. Their containment of the Obama experiment has been remarkable. But reversal — rollback, in Cold War parlance — is simply not achievable until conservatives receive a mandate to govern from the White House.

Lincoln is reputed to have said: I hope to have God on my side, but I must have Kentucky. I don’t know whether conservatives have God on their side (I keep getting sent to His voice mail), but I do know that they don’t have Kentucky — they don’t have the Senate, they don’t have the White House. And under our constitutional system, you cannot govern from one house alone. Today’s resurgent conservatism, with its fidelity to constitutionalism, should be particularly attuned to this constraint, imposed as it is by a system of deliberately separated — and mutually limiting — powers.

Given this reality, trying to force the issue — turn a blocking minority into a governing authority — is not just counter-constitutional in spirit but self-destructive in practice.

Krauthammer goes on to add that to turn down the Boehner plan is to play right into the hands of the young president.

Obama faces two massive problems — jobs and debt. They’re both the result of his spectacularly failed Keynesian gamble: massive spending that left us a stagnant economy with high and chronic unemployment — and a staggering debt burden. Obama is desperate to share ownership of this failure. Economic dislocation from a debt-ceiling crisis nicely serves that purpose — if the Republicans play along. The perfect out: Those crazy Tea Partyers ruined the recovery!

Why would any conservative collaborate with that ploy? November 2012 constitutes the new conservatism’s one chance to restructure government and change the ideological course of the country. Why risk forfeiting that outcome by offering to share ownership of Obama’s wreckage?

I consider myself a proud member of the tea party movement. But I also understand what’s at stake. It is indeed a high-stakes game that’s going on right now. The tea party freshman could very well be right. This might very well be the last chance to get spending under control. And by accepting the Boehner plan you agree to add another trillion dollars for national debt. That does not sit well with me. On the other hand if the Republicans can’t move anything out of the house, or move something tougher to the Senate and nothing gets to Obama’s desk, the Republicans run the risk of turning the whole shebang over to the most liberal president this country has ever seen and then it’s Katie bar the door. Take the poll, you decide.

Boston students still bussed,, but now it is based on school quality, not r...