It looks like the man so smart he couldn’t figure out his taxes will be confirmed as Treasury Secretary. Too bad. Tim Geithner also happens to be one of the “brain trusts” behind the current financial TARP program. You know, the one that’s been trying to bolster bank balance sheets. Soon … he will be asking for more money … and for what? 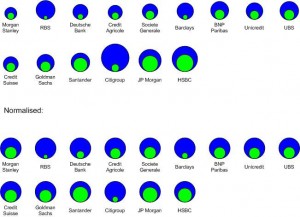 You might find the following chart posted by Cody Willard at Fox Business interesting. It shows what banks were worth in 2007 when they were riding high on the real estate wave and credit swap craze … it also shows what they are worth now. And begs the question … why did they stick with the smoke and mirror balance sheet so long? Why not shed some of those assets when they still had value? Click the graphic to see the full size chart.

Update: (Steve) Posted is a new version of the same original chart from the Neil Hume at Financial Times. It still shows bank market capitalization comparison between the second quarter of 2007 and Jan. 20, but this version includes a normalized view, so it is easier for readers to compare relative shrinkage, as Hume calls it. In other words, Citibank = massive hit, JP Morgan = not as bad.  /steve

Chat room and Blog contributor Dave suggested it might be time to post that shocking revelation from Fox News … you know … the one that says the Feds have actually pumped more money into the banks (specifically BOA) than its worth.

Not sure what the next move is … but my guess is complete government control of America’s capital system. Doomed I tell you. We lose our free market system because of the recklessness of others … and we end up paying for it.

Update: BTW … the podcast with Cody Willard is up on the WTIC site … great interview today.

Palin to step down as Alaska governor – video added
Capitalists … Meet Your Master
Penn State warns: Watch out for those crazy veterans
Game on! Bush torture memo prosecutions NOT off the table UPDATE: Thompson Speaks
Media Matters: Pelosi misrepresented and Fox misleading
President: “Republicans On Board” GOP: “Not So Fast”
Lieberman pushes back on Obama and Gitmo release
9-11-01 – Update: Video added
2 replies