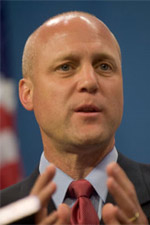 Yesterday, the president was successful in getting BP executives to fork over $20 billion – probably just a deposit – towards funding an escrow account to pay claims. The federal government’s success provided clearance for the city of New Orleans to do the same. They want $75 million.

I asked the question a couple of hours ago … what will Obama’s demand of $20 billion lead to? From NOLA.com, with my emphasis in bold.

New Orleans Mayor Mitch Landrieu today sent a letter to BP CEO Tony Hayward asking the company to give the city $75 million over three years to mitigate the long-term effects of the massive Gulf of Mexico oil spill on the tourism sector.

Flanked by tourism leaders and industry employees, Landrieu said the investment would help local leaders use print, TV and social media to spread the message that New Orleans’ hotels, restaurants and tourist attractions remain open despite the spill’s catastrophic effects on the environment.

So, now we know the BP cash won’t just be used to make people whole and clean up the mess, it will be a slush fund for “local leaders” to pay for advertising, media and consultants.

Start lining up folks. If you are a state or city in the area, send in your demand for payment today!

In depth: The Deepwater Horizon BP oil spill cause

The Government strikes again: Gulf fisherman who don’t work get more than those who do

Where did all the Hurricane Katrina Cash Go?
1 reply