This is a murder that did not have to happen. Deputy Josie Fox was shot and killed by an illegal alien during a traffic stop at 1 a.m. Tuesday morning on U.S. Highway 50 in Delta, Utah. 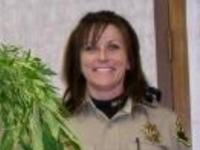 Again, let me make this quite clear. If this criminal was deported and kept out of the country Deputy Fox would still be alive today, happily spending time with her two children.

Fox was with the Millard County Sheriff’s Office for more than five years and was well thought of especially by the younger generations in the community as she built trust with teenagers as they grew up.

Here is the original breaking story from the Salt Lake Tribune.

On Tuesday, a few minutes after midnight, two vehicles met on a dirt road in central Utah. The late-night rendezvous drew the suspicions of a Millard County sheriff’s sergeant, who ordered Deputy Josie Fox to pull over one of the cars.

The 1995 gray Cadillac Deville she stopped was driven by Roberto Miramontes Roman, who, sheriff’s officials say, shot and killed Fox about 1 a.m. near Delta.

In the second car, according to court documents filed Tuesday, was Ryan Greathouse, Fox’s brother. The documents say that during the meeting on the dirt road, Greathouse bought drugs from Roman.

The alleged shooter has been captured; his criminal past and illegal border-crossing activities well documented. But nobody seems to want to enforce the laws we currently have on the books. Because of that fact alone, Deputy Fox will not be coming home safe to her family.

More on the capture and history of this criminal.

[Millard County Sheriff Robert] Dekker said police had not had a run-in with Roman since 2005.

Immigration officials said Wednesday that both Roman and Chavez Reyes are Mexican nationals who are in the United States illegally.

According to Immigration and Customs Enforcement (ICE), Roman was admitted to the United States legally in 1990, but was deported in 1998 to his native country because of criminal convictions.

He was arrested twice after that for illegally re-entering the United States and prosecuted in 2005 in U.S. District Court in Arizona for that offense, according to ICE. Court records show he was sentenced to 150 days in prison.

Utah state court records show that Roman has a significant criminal history, beginning in 1992 with a misdemeanor drug distribution charge to which he pleaded guilty in Fillmore. In 1996 and 1997, Roman was charged in Millard County in two different cases with a handful of felonies, including drug charges, receiving stolen property and a weapons count.

In the 1996 case, an informant told police he had been selling drugs for Roman for about a year, according to a search warrant affidavit filed in 4th District Court. The informant also told police he had traded a Tech 9 mm semi-automatic pistol to Roman for drugs, and that he believed Roman kept the weapon and a cache of illegal drugs in a back bedroom of his Delta area trailer home.

On Sept. 15, 1998, Roman was released from prison into the custody of immigration authorities and deported.

Matthews: Don’t pressure illegal aliens with law enforcement interaction, they might get mad

Øbama’s implementation of the “DREAM” Act