You probably have seen video of Howard Dean at Rep. Jim Moran’s (D- Va.) town hall meeting on Aug. 25. What you probably have not seen is the video from outside the school where a school security officer demanded a protester put his sign down. Did this use to be America? The officer states “it aint no more, OK?” 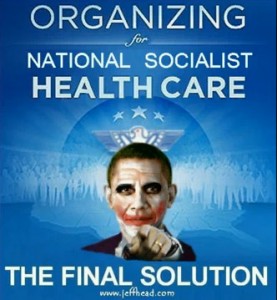 Inside the auditorium, Howard Dean made it quite clear the administration would not consider tort reform in the health care bill since they did not want to tick off the lawyers who contributed to Democrats, and in fact, probably is responsible for more than 50 percent of the total GDP within the beltway.

Outside South Lakes High School in Reston, Va. – a public school – YouTuber DissentFromDayOne posted video of officer Wesley Cheeks, Jr. who demanded the videographer take down his poster because he said it was “no good.” Other people outside the school had posters, but the other posters were OK since they did not have a picture on it.

Granted, the poster (at right) was one that certainly can be considered a conversation piece, but there was no threat and as far as I can tell, the videographer was well within his 1st Amendment rights. Cheeks did not like the poster simply because it placed President Obama in a bad light and he used his badge to intimidate and threaten arrest.

No sir, Officer Cheeks, you’re not going to get away with this one.

Update: When I posted, I had not noticed that Allah already had the video, and Michelle Malkin has labeled it video of the week. I’m afraid videos like this will become a bit too commonplace and the main stream media will ignore them. We will not.

Chris Christie to Dan Malloy: I got the job done. How ’bout you? Video
17 replies