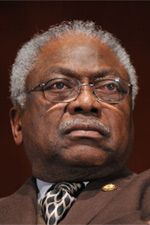 To ensure the new leadership of the minority party in Washington does not look racist, they have created a new, unnamed position with unknown responsibilities for South Carolina Rep. James Clyburn (D-S.C.).

Clyburn is currently the majority whip in the House, but after the election shake-up, many Democrats wanted to shake things up internally as well. Rep. Steny Hoyer (D-Md.) clearly had the votes to bounce Clyburn from the whip position, but many assume that “would not look good.” Over the weekend, Speaker Nancy Pelosi (D-Calif.) suggested a new position within the soon-to-be minority leadership.

Assistant to the assistant manager.

So they make up a job that has absolutely no responsibilities that will no doubt include a car, driver, larger office, bigger staff, and more prestige for what?

Answer the question on your own. From Fox News, with at tip to Gateway Pundit.

House Democrats averted a messy leadership struggle, clearing the way for Maryland Rep. Steny Hoyer to become second in command of their new minority without a challenge from South Carolina Rep. James Clyburn.

Under an arrangement worked out in private, officials said late Friday that Clyburn would instead receive a new position, title unknown and duties undescribed, explicitly labeled the third-ranking post in leadership.

The death of ERISA

What We Believe Part 6 – Immigration
Scroll to top