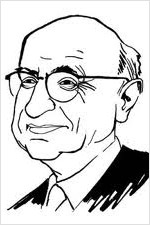 I’ve been reading a bit about Milton Friedman, a Hoover Institution economist – not a politician – who past away in 2006. Conservatives can learn quite a bit from this great man. We need another conservative economic mentor for present-day, and maybe Dan Mitchell is that person?

The headline from this article is a Friedman quote from a March 2000 interview billed as an effort to provide economic advice to the next president. Do read the full interview, I can almost hear Friedman’s voice discussing the topic with his unique inflection, almost guiding you to answer questions yourself with an approving smile.

Here’s a snippet from Peter Robinson’s interview with Friedman during an episode of the Hoover Institution’s Uncommon Knowledge. I didn’t mean to post too much of the interview, but I wasn’t quite certain what segment to grab – do go read the full thing.

Peter Robinson: Now let me ask you, I want to back up to this question of, cut taxes versus pay down the debt. So what you’re saying is, cut taxes, because Congress will never be able to resist the temptation to spend it. Paying down the debt may be a good idea, but it’ll never happen.

But let me ask you as an economic matter, if Congress could find the willpower to pay down the debt, should it? In other words, what would be better at this point purely on an economic analysis: paying down the debt or cutting taxes?

Let’s look at it this way: they pay down the debt. They buy up government bonds. What do they do with those government bonds? They put them over here in a box labeled: trust fund for Social Security. Now you come to the period when current receipts from wage tax are too sparse to pay benefits.

Milton Friedman: So they take these bonds out and sell them again to the public. How else are they going to pay for it? So what you are doing is simply changing the form of the debt, but you’re not really reducing the debt–

Peter Robinson: Because these obligations are going to be there no matter–

Milton Friedman: And their present value is a debt. And that debt is all recorded in this fake trust fund, which is pure paper artifice; has no real role.

Peter Robinson: But if you cut taxes, what does that do to help the government meet its unfunded obligations.

Milton Friedman: It doesn’t do a thing, but let’s go back. To meet the unfunded obligations, you really need a change in Social Security. All the rest of this talking about paying down the debt as a way of solving the Social Security problem–

Milton Friedman: –is an evasion. In the long run government will spend whatever the tax system will raise, plus as much more as it can get away with. That’s what history tells us, I think. So my view has always been: cut taxes on any occasion, for any reason, in any way, that’s politically feasible. That’s the only way to keep down the size of government.

In other words, to cure the disease you need to shut off the flow to the tap. The bold section referenced above may have hit you like a ton of bricks. Good.

Clarification: Free Republic readers rightly make the point that government will now spend whatever the tax system will raise, plus a lot more … like double, or triple…

I certainly did not mean to put Dan Mitchell – from the Cato Institute – on the spot or make him uncomfortable in the first paragraph, but he’s been doing a great job with his videos for a new generation of conservatives, and we really do need a national conservative economic mentor who is not interested in running for political office.

Today. Mitchell has a new post discussing the value added tax (VAT) in which he refers to a short post in Investor’s Business Daily where Jim Powell reminds VAT supporters the system is not exactly working out all that well in Europe.

Many think the introduction of a VAT – on top of the already existing income and corporate tax scheme – is a long shot that won’t happen, but don’t be so sure. Remember Obama’s work group on federal spending and the budget are due to report in December, after the mid-term elections this year. Let’s see what they come up with.

Hat tip to Kenneth Anderson at Volokh Conspiracy for providing all the links, and read his post (lots of referenced links in this post – click and read them all!) as he ponders why many economists are favorable to the VAT tax … as long as it replaces the income tax. He discusses the hidden nature of the VAT.

The hidden nature of the VAT makes it a politically feasible way to creep up tax revenues, because of the fact of rational political ignorance on the part of voters, and public choice incentives on the part of politicians to increase government and the concomitant revenues to fund it.  This is a slightly different point than Mitchell makes in his piece; Mitchell focuses on more revenue streams available eventually equals government to match, as Friedman argued.  But the specific argument against the VAT is the politically hidden nature of the tax, because it is imposed at each stage of value-added, but then is no longer visible to the end user as a tax, but merely as part of the “cost.”  If you’re a voter, that should be a bug, not a feature.  If you’re a member of the political class, so to speak, it is much more likely to be regarded the other way around.

Learn more about the VAT by watching the following video.

Federal Tax Scofflaws: One Down, Thousands to Go.

Iraqi, US special forces at work in Sadr City, Baghdad

FEMA Grants – Another symptom of the disease

Christina Romer: Sorry, we just don’t have a clue on how to fix the economy...