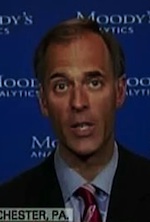 And he seems to be bolting from the Democrat camp who are calling for an end to the Bush tax cuts. The video is below, but the Democrats are in a real jam. They quote this guy more than Saul Alinsky . What’s a lefty to do?

While Barack Obama tours the nation claiming that the economy has started heading in the right direction, the data continues to show otherwise.  Today, the Department of Labor announced that initial jobless claims hit 500,000 last week, the highest level in 2010 and highest since last November.  The four-week rolling average spiked upward again as well:

AS i have said many times, you’re looking for new claims to fall below 400,000 and actually get closer to 300,000 before you can talk about declining unemployment. And this is heading in the wrong direction, a fact even Wolf seems to get.

To summarize the highlights, or lowlights:

Boehner: There will be no tax increase … on anyone

Your Krauthammer Moment: No tax cuts, no budget, they’re incompetent

For Democrats, tax cuts are ‘expensive’ – Hogwash, government is expensive

The true cost of hiring just one employee
18 replies

The Government strikes again: Gulf fisherman who don’t work get more than...