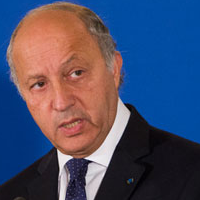 So what does French foreign minister Laurent Fabius know that we don’t know? He’s set a line in the sand, a deadline if you will, outright stating that we have 500 days left to avoid climate chaos.

Now, nothing at all will happen in 500 days since this is all hogwash, but if we don’t do something within those 500 days, climate chaos is a certainty – so says Fabius. We’ve heard this before and nothing has happened. From Fabius’ remarks yesterday. I’m grabbing all of it so you have the context (see update below). I think Fabius may be a bit out-of-touch since Secretary of State John Kerry said absolutely nothing about climate while introducing Fabius, yet the first words out of this guys mouth were…

What the heck? Reading below, you’ll see Kerry mention all sorts of important foreign policy stuff including hot spots like Iran, Syria, Libya and Afghanistan, but NOTHING about climate change. Then, out of the total blue Fabius spits out his climate chaos sentence! (See update below.)

SECRETARY KERRY: Good morning, everybody. This is, indeed, a pleasure. Laurent Fabius, the foreign minister of France, has welcomed me to France more times than I can count. He’s been an exceptional host, and most importantly, a great partner as we have worked together on issue after issue since I’ve become Secretary. Second time we’ve been pleased to have him here at the State Department; he was here with President Hollande not so long ago.

But today, we have much to talk about in the context of our partnership and work together. France has been really one of the most steady partners in almost every single endeavor that we are engaged in, particularly on the challenge of reaching an agreement with Iran with respect to Iran’s nuclear program; with respect to Syria, where we have worked from day one on our efforts to hold the Assad regime accountable and provide support to the moderate opposition; with respect to Libya, Mali, Chad, the Maghreb, the entire Middle East peace process, Afghanistan. I mean, there really is not an issue where we are not able to find a path to be partners.

In addition to that, we share major responsibilities of the P5. The P5+1 initiative on Iran is a significant one. We work very closely together in Geneva and in Paris and elsewhere in our efforts to advance those negotiations.

So I’m happy to welcome Laurent here today. He’s now working with an expanded portfolio in the French Government in dealing with economic issues. I’ve said from day one foreign policy is economic policy, and economic policy is foreign policy. So we find ourselves working in concert on those issues too – on the health of our economies and the effort to provide jobs for our people. So it’s a great pleasure to welcome you here. Thank you, Laurent.

FOREIGN MINISTER FABIUS: (In French.) We have 500 days to avoid the climate chaos. (In French.)

FOREIGN MINISTER FABIUS: Well, I’m very happy to be with John. There is no week without a phone call or a visit between John and myself, and we have on the agenda many items, many issues – Iran, because negotiations are resuming today; the question of Syria, and we shall meet next Thursday in London together; Ukraine as well; and very important issues, issue of climate change, climate chaos. And we have – as I said, we have 500 days to avoid climate chaos. And I know that President Obama and John Kerry himself are committed on this subject and I’m sure that with them, with a lot of other friends, we shall be able to reach success on this very important matter.

And it’s always a pleasure to meet with John. We are working very closely together. And we speak either French or English, but the most important point, whatever the language is, is to (inaudible) case. Merci. Thank you.

Update: I was able to see the video – embedded below – and it looks like the State Department did not translate all of what Fabius said in French, which left the impression I wrote abou. The written transcript makes Fabius look like a fool, but that’s just another State Department gaff. Determining if Fabius is a fool will take about 500 days.

In early March … Ukraine issues “will not” affect US/Russia...

The value of a mortgage investment vs renting
Scroll to top