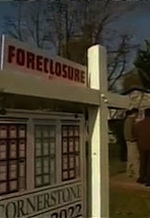 After the $26 billion dollar settlement that has supposedly fixed paperwork screw ups, set guidelines for the future, and put cash into the hands of some former-homeowners, bank foreclosures have jumped up 3 percent in the last month.

The foreclosure freeze of 2011 is thawing out and kicking back into gear.

While states that do not require a judge to preside over foreclosure proceedings, like California, saw a jump in filings toward the end of last year, judicial states have all but stalled. That will now change, thanks to the $26 billion dollar government-lender/servicer settlement. There will still be some delays on individual state levels, but the wheels are turning again, and that means more bank repossessions and more foreclosed properties heading to the re-sale market.

Bank repossessions, the final stage of the foreclosure process, increased at least 30 percent  year-over-year in several states, including Massachusetts, which saw a 75 percent spike.  Bank-owned or REO (real estate owned) activity hit a 16-month high in Illinois and a 15-month high in Indiana.  Default notices, the first stage of foreclosure, were flat nationally in January, but spiked in judicial states, like Connecticut and Pennsylvania (up 112 percent) and even in non-judicial states like Maryland (up 100 percent).

Read the full post over at CNBC’s Business site. This sucks, but if you happen to have residential rental property, you may have made a good investment if you bought at a good price.