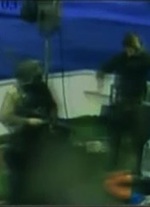 Jim Hoft has done the aggregating … so I’m not reinventing the wheel here, but somehow this does not surprise me. As I posted yesterday (video), this was meant to provoke and it is indeed more than interesting as Peter Brooks told us yesterday that 5 of the boats “heaved to”, while one fought back. Can you say “terrorists”.

In a special meeting of the Security Cabinet it was disclosed that a group of 40 people on board the Mavi Marmara with no identification papers belong to Al Qaeda. The terrorists were equipped with bullet proof vests, night-vision goggles, and weapons.

On board the Mavi Marmara ship that arrived as part of the flotilla to Gaza was a group of approximately 40 people with no identification papers, who are mercenaries belonging to the Al Qaeda terror organization. This was disclosed by the Israeli Security Cabinet, which gathered on Tuesday evening (June 1) for a special meeting.

According to intelligence disclosed during that meeting, the terrorists wore bullet-proof vests, and carried with them night-vision goggles, weapons, and a package of cash. While the civilian protestors were sent to the lower deck during the Shayetet Naval Special Force’s interception of the ship, the group divided into cells and remained on the upper deck in order to attack the soldiers.

Could it be that 5 of the boats were cover for the last one? It seems logical. That gives you five boatloads of people, Americans, Turks, Sweeds, etc, who testify to the peaceful nature of the flotilla, while the one boat of terrorists does the dirty work, create the confrontation, and stir up international hatred toward Israel. Read the whole post.

Plus AP at Hot Air also draws attention to Israel’s “friend”, Turkey and it’s connection to the whole incident.

So here’s a krazy kwestion for you, assuming that some of the detained passengers do indeed turn out to be bona fide jihadists: Given that Turkey’s fingerprints are all over the flotilla, and given that their bottom-feeding prime minister is now maxing out on demagoguery by calling this “a turning point in history,” will the Turkish government’s associations with radicals become part of the investigation into Israel’s actions aboard the ship? Since the world’s now on a big fact-finding mission and all, it might be worth finding out whether a full-fledged member of NATO is, to some greater or lesser extent, using jihadist proxies to instigate international crises.

AP also has four videos released of the weapons of peace the activists brought on board. Plus video interviews and analysis.

These peace activists got exactly what they wanted … an international incident.

“I only wish I had a gun rather than a camera.”

Nuclear power good for Iran, not good for USA
3 replies