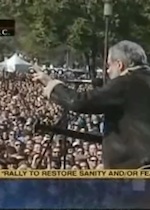 Yesterday, we had Comedy Central’s non-political political rally.  John Stewart and Stephen Colbert held their “Rally to Restore Sanity/March to Keep Fear Alive” stunt in the nation’s capital.  Now, glossing over their general incompetence leading up to the event, such as their initial failure to secure sufficient “facilities” for the expected crowds and expecting that the Marines would “share” with this bit of political buffoonery.

More sinister, however, was the effort by the duplicitous duo to try to prevent filming of the event by outside press.

PJTV’s Washington Bureau chief Richard Pollock inquired with the Comedy Central’s senior vice president of corporate communications Steve Albani about receiving credentials. Albani claimed that Pollock would not be given credentials because of limited supply, and as such there would be no room on the “press riser” for PJTV’s camera and crew. When Pollock said that he’d be fine with filming not on the press riser, Albani said that filming would be “strictly prohibited” between 3rd and 7th streets on the National Mall (ground zero for the event).

In other words, since it is Federal land and a public location, banning the media, especially since “the media,” in the form of Comedy Central, was already there, would be against Federal regulations.  Now why, I ask, would they want to prevent media coverage of their publicity stunt?  Why would they want to hide just how classy their fan-base is?  (Note to liberals – it is inappropriate to do something, then complain that your opposition is doing the exact same thing back to you and then go do it again.  It makes the more educated and intellectually honest members of the audience point out your hypocrisy and  flash on the sheep from Animal Farm).  Or, maybe, it was that their “non-political event was not quite as “non-political” as they claimed?

Whatever the reason, it is nice to see the First Amendment is alive and well, even if Comedy Central and a couple of clowns wanted to stifle it.

Arianna Huffington: This election does not mean voters are rejecting Democr...