I was Jim’s guest on the Sound Off Connecticut’s special Saturday edition as he filled in for Dunaway. I mentioned the federal government was borrowing $20 billion a week. Sorry, I messed up. As of the end of July, we’re borrowing $43 billion a week, ensuring the 2009 deficit will be $2.2 trillion. The 2003 total federal budget submitted by President Bush was $2.2 trillion.

Nothing to see here. It’s all completely normal. We have to spend this money – that we do not have – to fix the economy stupid.

One year ago, the 2009 deficit was expected to be a “record” $490 billion. We’ll quadruple that estimate.

Tax receipts declined by 17% in July, but spending went up by 21%.  Shouldn’t spending decrease when less money gets received?  For American families, that’s certainly how it works.  At the very least, one would expect Congress to hold the line on spending and stop any increases when it expects less revenue.  That would be the fiscally responsible path to take in an economic crisis.

Where did that money go?  It went to the continuing bailouts of financial firms and to the automakers.  Money also got spent on a stimulus package that has failed to stimulate anything, except a few thousand temp jobs and state deficit spending.  All that money stimulated was bureaucracies at the state and federal level, and at best paid for projects in 2009 that would have been funded through normal channels in the next year or two anyway.

Small wonder Barack Obama postponed the administration’s release of budget numbers last month in the middle of the health-care debate.  With the 38% swing in the deficit from last July, it would have made proposing a massive new federal program to run the nation’s health care much more difficult to justify.  Would you trust your health-care decisions to someone who can’t balance a checkbook? 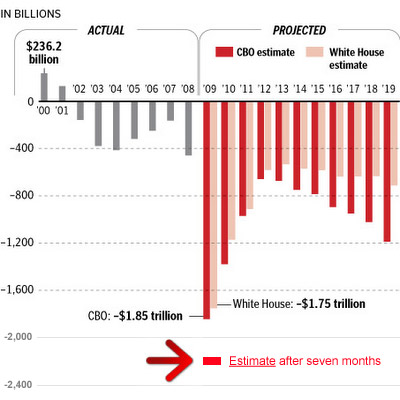 You too can keep your private health insurance …

EPA administrator admits that Cap-n-Trade will NOT affect climate change!

Health insurance number one story of the day – clear bias

Debt, deficit…what would Canada do?
1 reply

If I were you, I’d stop doing business with the state of CaliforniaCylla and Charybdis
Scroll to top