For some, it makes a big difference. I’ve been spitting out tax statistics that people have been shrugging off for years, but I had a revelation earlier today. It does not matter. It’s just another Symptom of the Disease.

What do all of those complaints have in common? It’s the federal government. I’ll never say there should be no government oversight or regulation, but you need to face the following fact.

There will be no law or presidential executive order that will solve the problem. None – it’s not possible.

Got that? Any additional rules or tweaks to the tax system will not fix the problems as defined by the Occupy crowd. If you tweak the system in favor of the 99 percent, the 99 percenters will not experience any great rising.

You’d think that something really bad happened in the last year that resulted in the OWS protests, but the top 25 percent and top 50 percent who made more than $67,280 and $33,048 respectively, had their incomes go up a little bit. 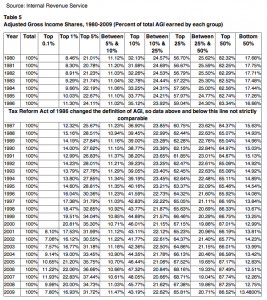 I’m not sure what will happen in 2009 through 2010, and I would not be surprised if everyone was a loser … except for the federal government of course, who gets to spend every dollar we send them plus another 35 cents that we don’t have.

One last tax table. Take a look at the percentages carefully. This is from IRS data, courtesy The Tax Foundation.

So the point is the statistics tell a story, and we can all put our different spin on statistics and complain about 1 percent here, or 5 percent there. If you want to discuss the real disease, of which all of these symptoms are derived from, you need to learn to embrace Federalism and understand these problems are all the result of the gross expansion of the federal government’s role throughout the country.

We are the United States of America. Let’s get back to the importance of States in the equation.

I know, you’re all sick of me bringing this up…

The Supreme Court and Obamacare
Scroll to top