Extreme, fringe, and tea-baggers … this is what your Senator thinks of all of you. And the very fact that he has had to resort to using fowl sexual language to describe his constituents gives you a good indication of the state of his campaign.

Dodd’s campaign manager, Jay Howser, said that the tea-baggers have nothing to offer.

“The great thing about the far right wing, extreme group of tea-baggers who have entertained us throughout the summer is that their idea of free speech is akin to shouting down opposition, drowning out debate, and in Connecticut, encouraging Sen. Dodd to commit suicide with painkillers and alcohol,” Howser said. “No responsible American, regardless of their political beliefs, thinks that this fringe element has anything valuable to offer to our country’s discourse or debate.” 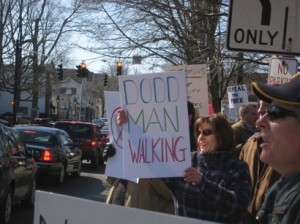 It’s on thing when Media people get their jollies using now well known sexual slang to describe suburban housewives, grandmothers and other hard working New Englanders protesting an out of control, big spending, overbearing government, not to mention a Senator who seems to have some serious and regular lapses of judgement. But when a representative of the senior Senator from Connecticut uses this kind of language … it smacks of desperation.