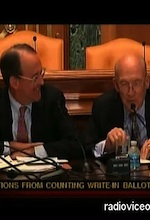 I have spent the evening reviewing the Debt Commission summary and the pundits’ complaints on the right and left. The left … led by among others, the suddenly rehabbed Keith Olbermann focus on cuts to Social Security and Medicare. Ridiculous. If these are cuts then we have no hope of implementing anything real. But the right may push any reform right off the table. One more thing. I think I agree with Juan Williams on this. Does that make me a bad person?

But my take is a little different. I think the plan is a good one. I think it is a benchmark for  Congress that lacks little restraint. It is the first adult conversation anyone inside the Beltway has had on debt control in my memory. For instance.

Requires a one percent spending cut based on the spending levels of the previous year from 2012 until 2015, but bases these cuts off of the starting point of the bloated FY10 levels and only requires spending reductions until 2015, the benchmark for the President’s goal of deficit reduction.

It’s not perfect but it’s also not law. There is nothing to stop a Republican Congress from setting benchmarks at 2008 spending levels, which may I say, isn’t exactly the definition of fiscal restraint either.

The left on the other hand, is portraying this plan as an assault on the old and ill. Hardly. It’s true the bill calls for changes in both social security and medicare:

On Social Security, the plan would gradually raise the retirement age to 68 around 2050 and 69 by 2075. It would combine a cut in benefits with a rise in taxes on wealthier people’s incomes. It would also seek to rein in federal spending on health care beyond what’s called for in the recently passed health-care overhaul. This would be achieved by introducing further changes, including reform of medical-malpractice law, and by seeking to slow the growth of the Medicare program.

Calling this an attack on the old and sick is nonsense. One Democrat said he could not support a plan that asks the middle class to work until they are 69, without bothering to add that the “69” age threshold will apply to Americans who are currently 4 years old. I would imagine that a four year old’s life expectancy will be greater than today’s seniors and I also expect a 4 year old has plenty of time to plan for this “unconscionable” attack on his middle classness.

Other changes make great sense and are close to what I have been calling for for a while now. For instance:

Among the controversial proposals, the plan in its current form would end or cap a wide range of breaks relied on by the middle class, including the deduction for home-mortgage interest. It would tax capital gains and dividends at the higher rates now levied on wage income. To compensate, one version of the plan would dramatically lower and simplify individual rates, to 9%, 15% and 24%.

For businesses, the plan would significantly lower the corporate tax rate—from a current top rate of 35% to as low as 26%—but also eliminate a number of deductions. It would make permanent the research and development tax credit. Overall, the plan would cut the federal deficit by $3.8 trillion by 2020.

It’s a simplified tax system that eliminates the tax breaks that have led to the kind of political shenanigans and special interest corruption that has made Congress the cesspool that it has become. While I prefer a one bracket system, I would be ready to accept a three bracket flat tax. And cutting the corporate tax rate is long over due.

Your thoughts are welcome but I found what Juan Williams had to say tonight interesting. He thinks it’s possible to get this through … even though most of the criticism is from the left.

Pronouncing this DOA simply because it’s not perfect is a mistake.Personally I would like to have seen a tougher stance on spending, but when a commission calls for a hiring freeze and pay freeze of Federal workers, a modified flat tax, cut corporate tax rates and spending pegged to something for a change, you have my attention. Go ahead my little mobsters … start taking your shots. I’m a big boy, I can take it.  And please don’t hate me for standing with Juan on this.

UPDATE: If you are thinking there’s time to mull this over … mull this one over.

Controversial or not, Bowles said serious action was demanded. He declared, “This debt is like a cancer that will truly destroy this country from within if we don’t fix it.”

The government reported separately Wednesday that the deficit for last month alone was $140.4 billion — and that was 20 percent lower than a year earlier. The red ink for all of the past fiscal year was $1.29 trillion, second highest on record, and this year is headed for the third straight total above $1 trillion.

Current deficits require the government to borrow 37 cents out of every dollar it spends.

To our Veterans on this day
Scroll to top