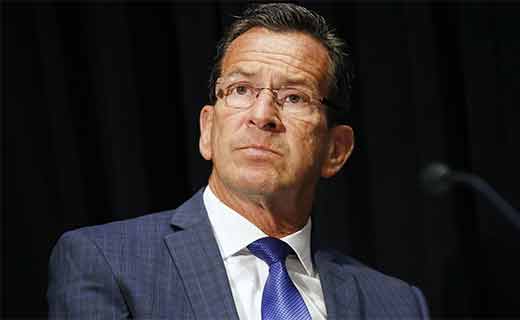 Section 15 of Connecticut’s Constitution reads “Every citizen has a right to bear arms in defense of himself and the state.” There are no qualifiers. There are no limits written or implied. And there is no mention of a $370 mandatory fee to a participate in this right.

Connecticut’s Gov. D.P. Malloy (D) is asking for that 325 percent increase in pistol permit fees as he makes an attempt to fix the state’s budget. Remember three years ago when the Hartford Courant breathlessly reported a budget surplus of $500 million? Malloy commented…

”There’s much work to do, but make no mistake: our economy is improving, private sector jobs are growing at the strongest pace in decades, and we are reducing the state’s overall indebtedness,” Malloy said in a statement. ”And we are accomplishing all of this at the same time we are putting money away in the rainy day fund. That’s a record to be proud of.”

Within hours many were openly laughing at the governor’s comments. Within three months, the CT Mirror let us know…

Plummeting tax receipts have ripped a nearly $300 million hole in the next state budget, leaving legislators and Gov. Dannel P. Malloy just one week to fix it, according to a new report Wednesday from fiscal analysts.

… the $500 million-plus surplus Malloy touted just two months ago when he proposed a tax rebate has disintegrated to $43 million.

How the hell does that happen? Mismanagement, making promises you can never expect to keep, and spending policies that absolutely defy the imagination is how. Now back to the fees.

For the simple reason anti-gun advocates think firearm owners should be punished, Malloy figures increasing the fees on pistol permits will be accepted. The simple fact is many good people live in communities that are hard-hit by crime. They have the right – as does every other law-abiding person – to defend themselves and the US Constitution and Connecticut’s Constitution confirms that God-given right. Why is anyone forced by the State of Connecticut required to pay close to $600* to get a permit to exercise this right? How is that moral?

It’s not. Some may say Malloy’s suggestion to raise permit fees is racist. It’s hard to argue it’s not. Maybe Malloy thinks pistol permits should only be available to those who have enough disposable income? Yeah, that’s it: Malloy hates the poor and could not care about their right to self-defense. I’m convinced.

But more importantly, let’s look at some fees the governor has not mentioned raising which includes a criminal background check, just like a pistol permit.

I could go on-and-on, but Malloy is not suggesting any of these fees be raised even though every one requires a complete background check and investigation of some sort.

Why are those wishing to participate in a God-given right, confirmed by both the US and Connecticut Constitution being targeted by Malloy? We know the reason.

* Along with the initial $370 state fee, Connecticut requires a training class that varies in cost between $100 and $160, plus the individual town’s tack on additional fees of at least $70. Hence … almost $600, not including the eight hours of time you need to take the class plus at least another four to six hours of your time with the local and state police. And that’s per person.

No ambiguity: Trump has authority to suspend entry of aliens