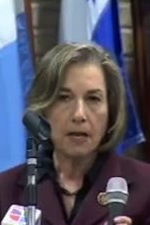 I wish that were the worst thing she had to say but it isn’t. How about …. these people actually believe in things like the 10th amendment, “Oy”. Ummm that wasn’t me with the oy, that was part of her quote. Entry question: Is she the only one in Congress who thinks like this?

Just for the record the 1oth Amendment reads, “The powers not delegated to the United States by the Constitution, nor prohibited by it to the States, are reserved to the States respectively, or to the people.” Ughhh, the people? Really? No one really believe that of the people stuff, do they? Well as the One once said, the Constitution is good as far as it goes … but it only says what the government can’t do.” Precisely Mr. President. I think they had Congresswoman Schakowsky in mind when they wrote it. From Naked Emporer News, via Hot Air.

Schakowsky, by the way, is the same person who told a rally that the idea behind Obamacare was to drive the insurance companies out of business. I thought that was crazy. But ya know, I’ve now watched this three times. It is pretty outrageous, huh?

Matthews more convinced than ever that … Palin’s running for President

Those Chilean miners would be dead if they were in the … Tea Party?
11 replies

Pat Caddell calls out White House Claim that Obama has governed during the toughest...

Liberal One National Rally: A friendly gathering of socialists
Scroll to top