Unbelievable waste of cash. I just turned on WVIT – the local NBC affiliate – and they reported Connecticut was planning to introduce the state-wide 511 system that I mentioned back in February. It appears that the state government – at a cost of $3 million – thinks that they can provide better traffic information then all of the radio stations, TV stations and Internet services combined.

The talking head on tube indicated that the system would be rolled out in 2010, but reminded watchers that they can already get traffic information for free from WVIT. You can even have live video sent to your phone by the station; they have more than 100 cameras to choose from.

Of course, the Connecticut DMV Web site promotes the new waste of tax dollars as mostly free – especially since the federal government is funding it.

511 is not yet available in the Nutmeg State, but you can use it in other states.
The master plan was to have a national system in which individuals throughout the country could simply dial 511 on their cell or landline phones and access this information. However, like many plans, this one has been slow to unfold, and much of the country is still waiting to have the service activated in their state.

The service is mostly free, and the information you receive by calling 511 is much more detailed than you’d get from a local television or radio traffic report. Some areas offer additional services, such as allowing you to check airport conditions.

Motorists can test out the service when traveling through states that deploy it. After dialing 511, just follow the voice instructions to access the information you’re seeking. Some states also have Web sites which allow you to review the information online.

This type of spending must stop.

Not only does this program duplicate a service that is already provided by every source imaginable – including radio stations, TV stations, Google and more – it’s being funded by the federal government. Here’s a hint folks, a 511 traffic information system is not listed as one of the responsibilities of the federal government in the U.S. Constitution.

The DMV site also states that the service will be mostly free. Mostly free? Where do they think the money is coming from? Taxpayers fund this crap and nobody seems to care.

Of course, they are trying to justify the cost by stating that the information provided will be much more detailed than what we would get from local traffic reports “on the eight’s” each morning. Hogwash, I can’t find any services provided by 511 that are not already provided by the private sector.

Each morning you can watch Rachel Lutzker provide the actual speed of the traffic around Hartford. If the TV is not on in the morning, you can always go to the Internet. 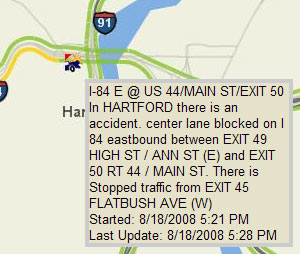 Or check out Google Maps on your Blackberry or other cellular phone.

The government can not and will not be able to provide a better service.

Where is the money going here? Who’s benefiting from this program? Follow the money.

Connecticut’s smoke and mirrors budget and other liberal wish lists

Traffic … thanks to our referrers

ACORN: Who will be fired in Philadelphia? Housing, prostitution, fraud

Duplicate state and federal programs just tip of the iceberg