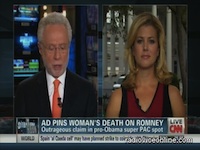 I thought we pretty much disassembled this ad yesterday with the Kimberly Strassel article over at the Wall Street Journal which you can find here. But last night on CNN’s The Situation Room, their staff went a step further, making this the most despicable ad so far in this campaign. But wait my little mobsters, there is so much more time for the Obama campaign to stoop even lower.

The ad was produced and paid for by Obama superpac run by former WH staffer Bill Burton, Priorities USA . First, a quick scan of the straws so article from 3 months ago. As she points out 1st Romney wasn’t even at main when the company shut down. 2nd 2nd, as we learn the Wall Street Journal Bain capital actually kept the company alive for almost a decade when it normally would’ve been shut down.

At the time, GST’s union blamed the company’s bankruptcy on the political class, for failing to hamstring imports. “We can’t compete against the steel imports that are being sold under cost,” said the president of GST’s union in 2001. “Our pleas fell on deaf ears in the political arena.” The Bush administration would ultimately slap on giant tariffs.

The bankruptcies were led by unionized companies that, like airlines and textiles and Detroit, had negotiated pay and benefits that helped drive their employers under. GST’s pension benefits would get passed on to the federal Pension Benefit Guaranty Corp., which in 2002 received $7.5 billion in claims from the steel industry alone. The PBGC covered GST’s basic pension payouts

But its CNN that dug even deeper that discovered that the woman who passed not only had health insurance after the steel mill went out of business but also she passed a good 7 years after Romney left Bain. Not exactly the narrative that the Obama campaign was looking for. Watch the whole thing my little mobsters it is a maze in journalism for change from CNN.

Shocked … Shocked I Tell You

Fair and Balanced: Krauthammer and O’Reilly on the Obama speech-“kicking and screaming”

The price of gasoline
Scroll to top