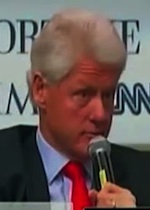 Clinton’s exclusive interview on CNN with Wolf is being framed as the former President voicing support for the current one. But that’s not exactly how I heard it. True, he starts with an Obama attaboy, but it doesn’t end that way.

The best part of this is listening to Clinton prioritizing the spill. First plug the hole even if you have to blow it up. And by the way, stop demonizing BP and why not let everyone row in the same boat for a while.

Now that my friends is a President who has his priorities in order. And I can’t believe I jut wrote that.

Guantanamo detainees in the US and enhanced interrogation techniques
23 replies

In depth: The Deepwater Horizon BP oil spill cause

Question of the Day: Can the Feds force you to eat food? Update
Scroll to top