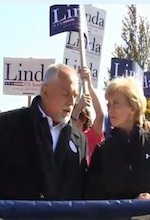 I know ironic. John Ratzenberger, who played a federal employee on Cheers, standing up Linda McMahon. But John is a hard working self made man who turned his talents into an amazing franchise, and when you listen to this ad you see that come through. I am not sure this plays big on TV because people love slogans and sluggin … but I was more than a little impressed.

Impressed because he walks through his argument for supporting Linda issue by issue. It is worth the watch. “I pity anyone who gets in her way in Washington.”

After listening,  your mind immediately does a comparison with the Democrat Blumenthal, someone who has never created the job and who business people believe, helps make Connecticut business unfriendly. It’s about jobs and  John Ratzenberger understands that.

UPDATE: What kind of guy is John? The kind of guy whose determination … not just talent … made him a success. Read this from Wikipedia.

The character was co-created by Ratzenberger, who had earlier auditioned for the Norm Peterson role. The producers let him know that he had impressed them, but that he didn’t really click as Norm. Ratzenberger responded by pointing out that what the ensemble didn’t have was a “bar know-it-all“. They asked Ratzenberger for an example, he improvised some dialogue for the know-it-all, and he was invited to play the role for a two-show tryout; he remained a regular throughout the show’s 11-year run.

Never quit, believe in yourself, allow your talent to rise to the top. Now this is an endorsement.