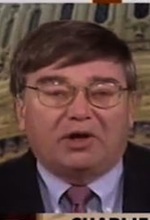 Adds the political guru and election tracker … I’ll be bagging groceries if that happens [the Democrats retain control].

This from the Daily Caller, via Yahoo, Charlie Cook, who makes a living lining up races and predicting outcomes tells the Morning Joe crew that things are getting worse not better for the Democrats. What, no comeback?

Republicans need 39, and I am told actually 45 because Democrats plan on taking 6 R seats in states like Louisiana and Hawaii. But Cook sees no problem. As he tells Joe … 100 seats are in play.

I spoke with my political guru this afternoon about Connecticut. He’s a sometimes crusty guy who has little patience with my ideological rants but I must add, he appreciates the “idealism”. So when he gives you a prediction he’s generally on the money. No longer involved in these races, here’s his take on Connecticut.

Three seats are actually in play in Connecticut. CT 2,4,5. CT 4 and 5 are “lean” Republican now and thinks both will be Rs by Wednesday morning. CT 2 he said is surprisingly close. JP is closing and that makes it in play. CT 1 is close too, but he said he just can’t imagine Larson losing … and then he chuckled again, almost at the delight that even the “safe” Dems are sweating this one out. It could happen in 1 AND 2, but he doubted it.

Don’t believe the polls, he laughed, and the Democrats know it. The McMahon race is single digits. He admits a win will be tough because while the race is close, real close, there may not be enough votes left to close the gap. That race, he said will hinge on turnout, more than any other. It depends, he says, on the size of the Tea Party vote. “She’s done so much good stuff, family stuff. The Make a Wish Foundation, education, and such. I don’t understand why she didn’t tell the world about that weeks ago. But she didn’t. Not getting her in would be a shame, a real shame.”

MSNBC strikes again: Why are so many women in the ... Tea Party?

Yes, health care is a commodity

Governor Christie to Governor Malloy: Read the Governor's owners manual and get back to me. UPDATE: Full video links
1 reply

Krauthammer on Obama’s Latino comment – a display of unbelievable...

WWE Shirts … yes we can
Scroll to top