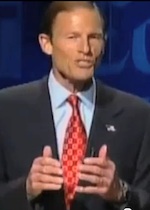 How? Why? Because he knows the economy so well? Because his cure for unemployment is sue the companies that provide the jobs? No, wait. It’s wrestling. Yeah, that’s it. Wrestling? This, my friends, is scary.

The latest Quinnipiac Poll has AG Richard “I’ll sue your ass” Blumenthal with an 11 point lead over Linda McMahon, as Democrats, Independents and … women, flock to the man who thinks only government can create a job. Egads.

After Linda McMahon had climbed to within 3 points of Attorney General Richard Blumenthal, he has stopped her momentum and increased his lead by 8 points in two weeks. While September wasn’t very good for Blumenthal, perhaps like Reggie Jackson, he could be called ‘Mr. October,'” said Quinnipiac University Poll Director Douglas Schwartz, PhD. “Fueled by a surge in support from women, Democrats and independents, Attorney General Richard Blumenthal has his best poll numbers since the start of the fall campaign.

So Q shows, people like him better now, now that they’ve heard him stumble his way through business and economic issues? No, not really. Forget the Democrat strength. The key here is McMahon’s standing among women.

Linda McMahon may have peaked too soon and her advertising saturation could be causing ‘McMahon fatigue. Blumenthal is running stronger among Democrats than McMahon is running among Republicans. He is winning women by an overwhelming 31-point margin, while McMahon has struggled with women throughout the campaign. They have a negative image of her but like him by more than 2-1,” Dr. Schwartz added.

I like Doug Schwartz’s poll. I do, so I don’t doubt the results but I wonder if this is how the election actually plays out and here’s why.

Blumenthal has 95% of Democrats in the latest poll, while McMahon captures 87% of the Republican vote. That means a good chunk of this margin is Democrats in a year when it’s the Republicans who are energized.  The other big base of support comes from women who support Blumenthal by 63 to 32. 2 to 1? Is it wrestling? In this economy, it’s wrestling? Well the NYT thinks so.

We have larger concerns with the Republican, Linda McMahon. She made her name and lots of money by running World Wrestling Entertainment, a noisy, demeaning business. Her policy positions, when you can discern them, are remixes of failed trickle-down ideas.

I don’t have the internals on this poll yet … but when I get them I will update. My guess is a lot of these numbers will depend on turnout and if it’s the Democrats alone that are giving him this boost, this race is much tighter then the poll suggests. Or am I just being a Pollyanna?

Smack Down: Connecticut US Senate race a dead heat UPDATE: Let’s get ready to rumble

Without the minimum wage we would be …. Cambodia?
Scroll to top